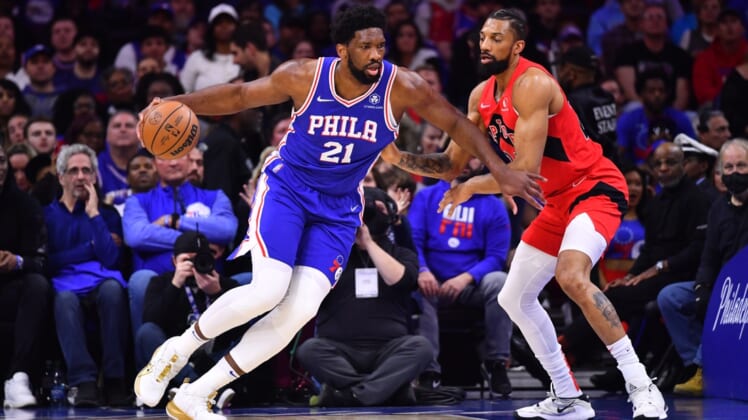 Chris Boucher added 12 points and 14 rebounds and Precious Achiuwa matched his season best with 21 points for the Raptors, who have won six of their past seven games. Scottie Barnes added 13 points.

Joel Embiid had 21 points and 13 rebounds for the 76ers, who had won their two previous games. Tyrese Maxey had 19 points, James Harden added 17 points, Matisse Thybulle had 12 and Georges Niang scored 11.

The 76ers used a 20-12 third quarter to take a five-point lead into the fourth quarter.

Toronto opened the fourth quarter with a 9-3 surge. After Philadelphia regained a one-point lead, Achiuwa scored four straight points and Toronto led by three with 7:36 remaining. Embiid tied the game by banking in a jumper and adding a free throw with 6:22 left.

Armani Brooks responded with a 3-pointer before Embiid’s layup cut the lead to one. After Philadelphia took a one-point lead on Thybulle’s free throws, Toronto went up by three on Gary Trent Jr.’s two free throws and Siakam’s jumper with 2:07 to play.

Trent stole the ball from Embiid with 27.2 seconds left, and Achiuwa made 1 of 2 free throws with 15.1 seconds remaining. Maxey made a dunk with 8.5 seconds left and Barnes missed two free throws. However, Harden was charged with an offensive flagrant foul on a layup attempt to end Philadelphia’s chances.

After jumping ahead by as many as 16 points, Philadelphia led 37-27 after one quarter.

Barnes’ tip-in with 4.4 seconds remaining in the second quarter completed an 11-2 run that gave Toronto a 57-54 halftime lead.

Embiid made five free throws during a 12-0 run that gave Philadelphia a seven-point lead with 2:36 remaining in the third quarter. Siakam answered with four straight points before Harden hit a short jumper. Philadelphia led 74-69 after three quarters.