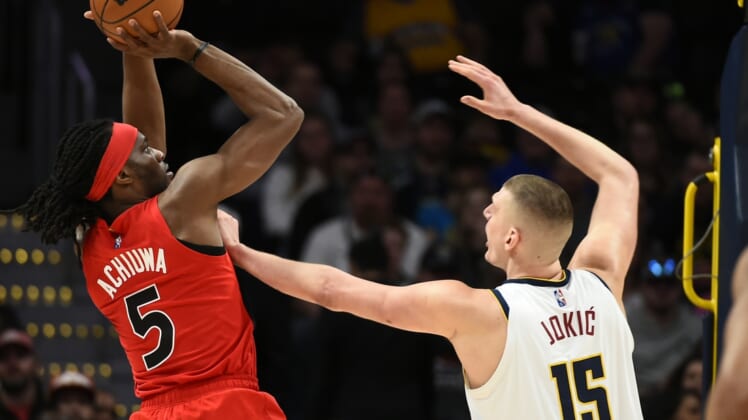 Chris Boucher had 21 points and 13 rebounds, and Precious Achiuwa scored 15 points for the Raptors, who won despite Fred VanVleet absent to rest his knee.

Nikola Jokic had 26 points and 10 rebounds, Bones Hyland scored 17, Will Barton added 16 in his return to the lineup, and Jeff Green scored 13 for Denver, which played without Aaron Gordon due to a foot injury.

The Nuggets opened up an eight-point lead at the start of the fourth quarter but the Raptors rallied with nine straight points to take a 105-104 lead on a three-point play by Thaddeus Young.

Hyland’s 3-pointer from the top of the circle ended the run but Toronto scored the next eight points to lead 113-107 with 5:14 left.

Barton’s layup cut it to four but Barnes and Boucher had layups around a Jokic offensive foul to lead 117-109.

Monte Morris split a pair of free throws and Denver had a couple of chances to get closer but couldn’t convert. Boucher hit a 3-pointer to make it 120-110 and Green dunked at the other end, but a layup by Barnes followed by a steal and a bucket by Young put the Raptors ahead 124-112 with 1:13 left.

The Nuggets led by six early in the game but Toronto went up 32-25 early in the second quarter. Denver got within a point three times but never got closer and trailed 65-63 at the half.

Jokic hit two baskets, Barton dunked and Hyland’s layup gave Denver the lead again, 86-80. The Raptors got within two points late but Rivers’ 3-pointer made it 99-93 heading into the fourth quarter.