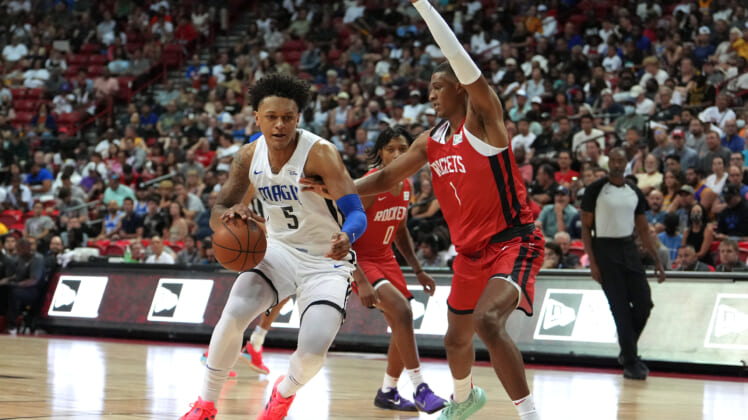 We try not to get too hyped over what happens during the NBA’s Summer League play. But it’s hard not to like what the Orlando Magic’s Paolo Banchero has shown so far since becoming the No. 1 overall pick just a few weeks ago.

In his first game of exhibition play, Banchero tallied 17 points and six rebounds, going up against Jabari Smith Jr., the third overall pick of the draft.

As if we weren’t already impressed from his performance against the Houston Rockets in game one, Banchero cranked it up a notch in his second Summer League matchup.

The 6-foot-10, 250 pound forward found himself on a fastbreak with no one else in sight. That’s when the former Duke star gave everyone in attendance a show, with a 360 slam. Here’s the clip.

Alright, so the kid’s got some impressive athleticism. Not bad. We’ll be more impressed when he pulls it off against NBA competition instead of the Sacramento Kings Summer League squad, but a 360 jam is tough to pull off at any level, so some respect is certainly given Banchero’s way.

As far as how the rookie will do in the NBA? It’s tough to know for certain until he takes the floor, but he’s surrounded by an exciting young core, with Jalen Suggs, Cole Anthony and the Wagners (Moritz and Franz), all still improving their basketball skills.

From what he’s displayed in a small sample size, Banchero will have no trouble adjusting to the next level, where he might even become the face of the Magic organization. First things first, he’ll have to beat out his fellow rookies for a chance to win Rookie of the Year.

Related: Houston Rockets tried to pull off draft day trade for No. 1 pick