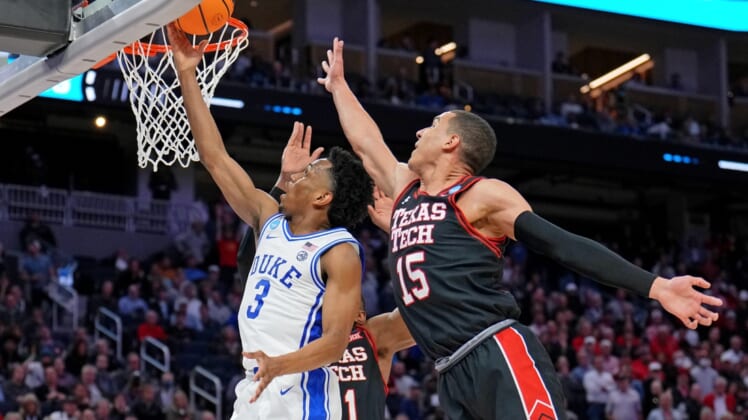 The victory was the 100th in NCAA Tournament competition for Duke coach Mike Krzyzewski, who is retiring after the season.

Jeremy Roach scored 15 points, Wendell Moore Jr. tallied 12 and AJ Griffin had 11 points and seven rebounds for the Blue Devils, who trailed for more than 26 minutes.

Duke shot a torrid 70.8 percent from the field in the second half and made its last eight shots. The Blue Devils shot 51.9 percent overall and were 7 of 19 from 3-point range.

Banchero drained the 3-pointer to give Duke a 69-68 lead with 2:55 left, and Roach added two jumpers as the Blue Devils held a five-point lead with 1:30 to play.

Texas Tech moved within 73-70 on a dunk by Arms with 27.6 seconds left. Moore made two free throws with 25 seconds remaining for Duke before Arms buried a trey with 13.1 seconds to play as the Red Raiders crept within 75-73.

Griffin made two free throws with 12.9 seconds to go to make it a two-possession game, and the Blue Devils closed it out.

The Red Raiders made 47 percent of their shots and were 6 of 19 from behind the arc.

The Blue Devils responded with a 9-1 burst. Griffin drained a 3-pointer to knot the score at 47 with 13:05 left, and Banchero knocked down a jumper 90 seconds later to give Duke the lead.

The Blue Devils later led 52-51 before McCullar scored five straight points to give Texas Tech a four-point lead with 9:24 left.

Duke answered with a 12-5 run, with Mark Williams capping it with a ferocious dunk to give the Blue Devils a 64-61 lead with 5:37 remaining.