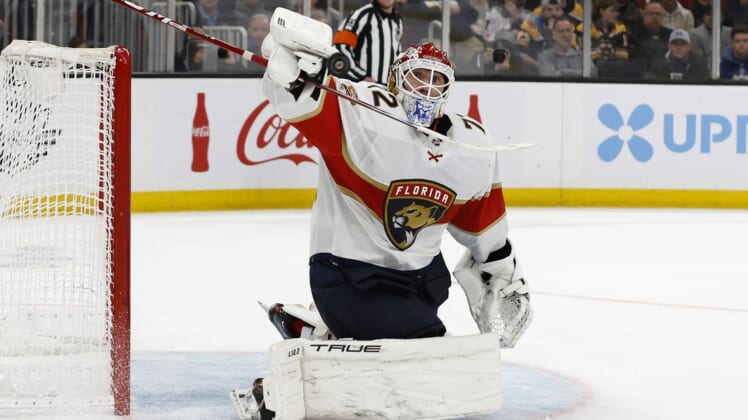 The Florida Panthers have clinched an Atlantic Division title and the top seed from the Eastern Conference for the Stanley Cup Playoffs beginning next week.

They just need to get to the postseason in one piece.

The Panthers are scheduled to visit the Ottawa Senators on Thursday in their second-to-last game of the regular season.

Radko Gudas (lower-body injury) and Anton Lundell (upper body) both missed the third period. Panthers interim head coach Andrew Brunette said Wednesday both will miss the final two regular-season games with a goal of returning for the start of the playoffs.

Gudas has been an everyday defenseman for the Panthers, playing in 77 games this season. Lundell has been a reliable rookie center, totaling 18 goals and 26 assists in 64 games.

“We’re obviously trying to be smart and ahead of the curve a little bit here,” Brunette said after Tuesday’s game.

Brunette already was being careful with his regulars.

Brunette rested Mason Marchment against the Bruins, while veterans Joe Thornton and Carter Verhaeghe returned against Boston after sitting out recent games.

It was evident from the Boston bench that the Panthers were operating at a lower gear.

“They didn’t look to me like they had their usual jump (Tuesday) night, for whatever reason,” Bruins coach Bruce Cassidy said.

Before the latest injuries to Gudas and Lundell, the Panthers were already expected to add players from their AHL affiliate in Charlotte, which has completed its season.

Florida should also have left wing Ryan Lomberg back against the Senators. He was suspended against Boston for instigating a fight with Erik Cernak of the Tampa Bay Lightning on Sunday.

Drake Batherson scored his second goal of the game in overtime to lift the Senators to a 5-4 win against the visiting New Jersey Devils on Tuesday.

Tim Stutzle, the third overall pick in the 2020 NHL Draft, scored short-handed and on a power play to give him 22 goals on the season.

Batherson got off to a hot start this season with seven goals and nine assists in the first 14 games, but was then sidelined for 2 1/2 weeks while in the NHL’s COVID-19 protocol.

He scored another 18 points in 17 games in December and January before a high ankle sprain knocked him out until late March.

His two-goal output against the Devils doubled his goal total in the 14 games since his return from injury.

“Just hasn’t been himself, even at practice,” Ottawa coach D.J. Smith said of Batherson. “He’s just starting to get back going again and getting in a rhythm, and (against the Devils), offensively, he was great.”

The Senators have one more game left after playing Florida, a matchup at the Philadelphia Flyers on Friday.