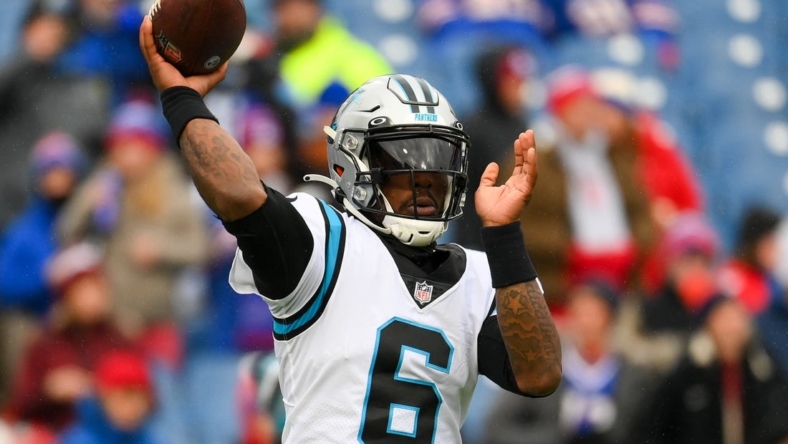 P.J. Walker will remain the starting quarterback for the Carolina Panthers in Week 9.

Panthers head coach Steve Wilks made the announcement Monday, a decision that again relegates Baker Mayfield to the bench.

Wilks said Mayfield has been a “ultimate, ultimate pro” over being benched.

Walker is 1-2 as the starter for the Panthers, who are 2-6 heading into their Week 9 game at Cincinnati.

Walker nearly rallied the Panthers to an unlikely victory Sunday in Atlanta. Walker hooked up with a diving DJ Moore for a 62-yard touchdown heave with 12 seconds left in regulation. However, an unsportsmanlike penalty on Moore contributed to a longer extra-point kick that was off the mark and kept the game tied at 34-34.

The Panthers lost in overtime as Eddy Pineiro missed a 32-yard field goal and the Falcons kicked the winning FG with 1:55 left. Wilks said the Panthers are sticking with Pineiro and have no plans to bring in a kicker this week.

Walker, 27, is completing 62.5 percent of his passes for 614 yards, with three touchdowns against one interception. The former XFL player is making $895,000 this season.

Mayfield, with a contract worth as much as $18.86 million this season, was 1-4 with 962 passing yards to go with four touchdowns and four interceptions.

Last year’s starter, Sam Darnold, is in the 21-day practice window to be activated to the 53-man roster. He was designated for return from injured reserve on Oct. 19. Wilks said he will continue to be evaluated.