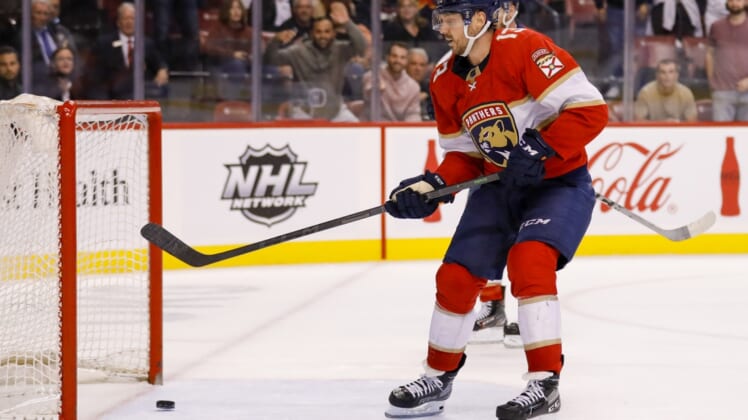 The Florida Panthers open a seven-game road trip against the Los Angeles Kings on Sunday night, and they’ll look like a considerably different team from the on the Kings saw last time the two faced off.

The Kings won the first meeting 4-1 in Sunrise, Fla., on Dec. 16, but the Panthers played with just 16 skaters because of a COVID-19 outbreak and other injuries. The Panthers called up four players that day from their AHL affiliate in Charlotte.

Florida is healthy now and riding a five-game winning streak, their longest since winning their first eight games to start the season. The Panthers are coming off a 6-3 win against the visiting Philadelphia Flyers on Thursday. Sam Reinhart had a hat trick in the win, and he said that achievement was a reflection of how well the team is playing.

“We’ve been winning some battles, extending some plays,” Reinhart said. “We have enough skill out there to just kind of trust our system and simplify it. We’ve been having success with that.”

Jonathan Huberdeau had four assists against the Flyers to give him 64 on the season, breaking the team record of 62 he set in the 2018-19 season.

“Obviously, it’s been a good year,” Huberdeau said. “I know we’re getting points. Everybody is getting points on our team. We have a lot of depth. It’s been a fun year. Obviously we’re scoring a lot of goals, and I was just happy to get two points. Franchise record, it doesn’t really matter.”

The Kings were one of the hottest teams in the NHL heading into the week after knocking off the Boston Bruins 3-2 in overtime to finish their road trip 3-1-0 on Monday. Since then, they’ve lost back-to-back games to the San Jose Sharks, the seventh-place team in the eight-team Pacific Division.

The Kings remain in second place in the division, four points ahead of the Edmonton Oilers and Vegas Golden Knights.

“It’s that time of the year where you’ve got to flush it quick,” Kings coach Todd McLellan said. “You’ve got to get your game back.”

The Kings have been dealing with a number of injuries of late.

Athanasiou is expected to be sidelined the longest after getting injured toward the end of Thursday’s 4-3 overtime loss.

“(Athanasiou) has had a tough year, health-wise. That’s been his biggest obstacle,” McLellan said. “He’s been the player we expected him to be. His injuries, and his in and out of the lineup, has not helped him one bit this year. It’s tough for him.”

The seven-game road trip for the Panthers will be split between four games on the West Coast, followed by six days off and then three games in Canada.

The Panthers enter play Sunday with a five-point lead over the Tampa Bay Lightning for first place in the Atlantic Division and No. 2 in the Eastern Conference, two points behind the Carolina Hurricanes.