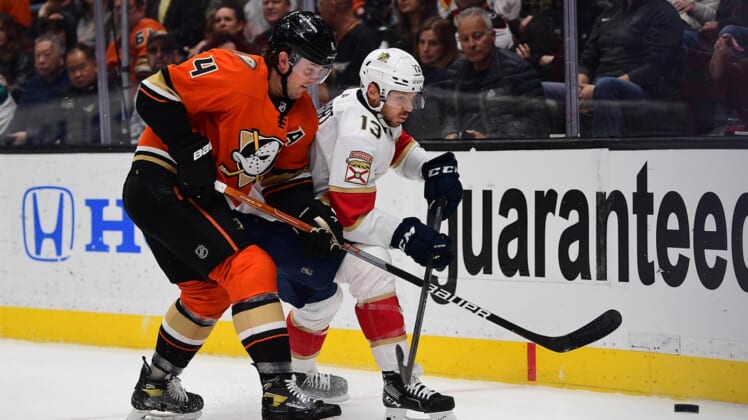 Jonathan Huberdeau scored twice and Spencer Knight made 17 saves for his first NHL shutout as the Florida Panthers defeated the host Anaheim Ducks 3-0 on Friday.

Joe Thornton also tallied for Florida, which rebounded after having a seven-game point streak snapped a night earlier in a 5-3 defeat at Vegas. It might have been a costly win, however, as the Panthers defenseman Aaron Ekblad sustained a lower-body injury early in the first period and didn’t return.

Knight, a 20-year-old Connecticut native, was appearing in his 27th career NHL game and making his 23rd start.

Huberdeau scored both his goals in the first period, in which the Panthers outshot the hosts 19-4.

The first goal came on the power play at 13:54. Sam Reinhart skated the puck behind the net and found Huberdeau on the inside edge of the left faceoff circle. Huberdeau, who leads the league with 65 assists, put a one-timer into the far upper corner of the net.

Huberdeau scored again from nearly the identical spot with 6.3 seconds left in the period. Aleksander Barkov dug the puck out of the left-wing corner and sent a backhanded pass to Huberdeau for a low one-timer that got past a screened Gibson.

The Ducks nearly cut the deficit in half about 3 1/2 minutes into the second on a two-on-one break, but Max Comtois had the puck go off the heel of his stick as he had a shot at an open net.

The Panthers went right back down the ice, with Noel Acciari going around the back of the net for a wraparound attempt that Gibson stopped. However, the puck fell right to Thornton outside the right post, and the veteran lifted the rebound high into the near side of the net to make it 3-0 at 3:44 of the second.

Ekblad, the Panthers’ top defenseman, went down just 1:05 into the game. He was involved in a three-man collision with teammate Barkov and Anaheim’s Cam Fowler along the boards. Ekblad tried to crawl to the bench before play stopped. The training staff hopped on the ice to help him to his skates and down the runway to the locker room as he appeared to favor his right knee.