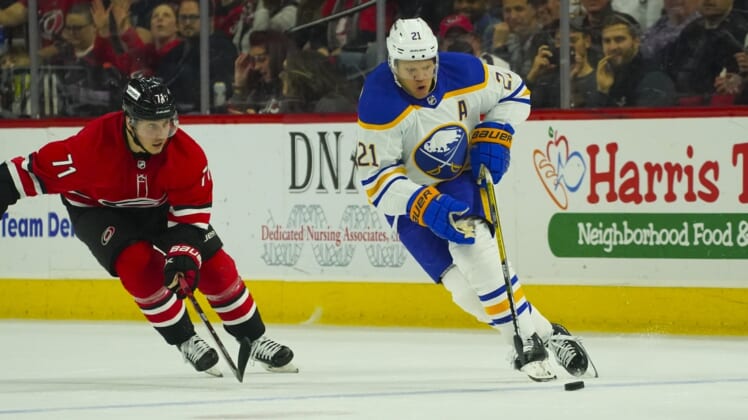 Sam Bennett scored with 38 seconds remaining in the third period to give the Florida Panthers their sixth straight win, 4-3 against the visiting Buffalo Sabres on Friday.

Aleksander Barkov found Bennett open at the right side of the net for the tap-in for Bennett’s 100th NHL goal.

Sam Reinhart and Claude Giroux each had a goal and an assist, and Barkov and Brandon Montour each had two assists for the Panthers (50-15-6, 106 points). Sergei Bobrovsky made 19 saves.

Victor Olofsson gave Buffalo a 1-0 lead on the power play at 6:27 of the first period. Denied on his first two one-timers, the third time was the charm for Olofsson, as he converted from the right circle in the final seconds of the man advantage.

The Panthers responded with a power-play goal of their own at 8:25 when Giroux, at the goal line on the left side of the net, connected on a pass from Jonathan Huberdeau to tie it 1-1. With the assist, Huberdeau extended his point streak to 10 games (seven goals, 12 assists).

Mark Pysyk put the Sabres back in front 2-1 just 20 seconds later, intercepting a Florida clearing attempt before his shot from the wall hit Panthers defenseman MacKenzie Weegar’s leg and deflected into the net.

Jeff Skinner made it 3-1 at 15:35, taking a pass from Tage Thompson at the goal line and skating to the front of the net before lifting a backhand over Bobrovsky for his 30th of the season.

The Panthers pressed in the second period, outshooting the Sabres 16-3 in the session and scoring twice.

Patric Hornqvist cut it to 3-2 at 9:30 of the middle frame, banking the puck off of Tokarski and into the net.