Panthers slip by Sharks in shootout 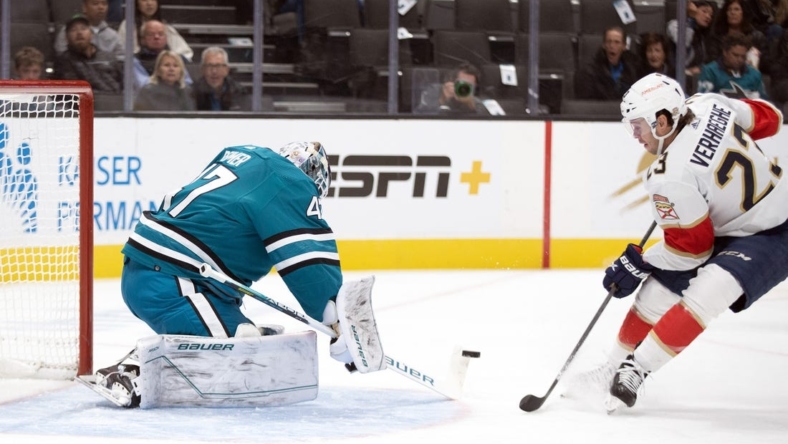 Sam Reinhart scored the only goal in a four-round shootout as the Florida Panthers defeated the host San Jose Sharks 4-3 on Thursday night.

Sergei Bobrovsky, who allowed a pair of long goals in regulation, made 36 saves through overtime and came up big with those four stops in the shootout.

James Reimer, a former Panthers goalie, made 41 saves but took the loss.

Erik Karlsson led San Jose with one goal and two assists. He leads all NHL defensemen with 10 goals and 18 points. However, he missed his shootout opportunity as his attempt rang off the post.

Matt Benning and Timo Meier had San Jose’s other goals.

Matthew Tkachuk tallied three assists. He leads the Panthers with 16 points and has produced at least one point in nine of Florida’s 11 games.

Florida opened the scoring on Barkov’s power-play goal with 13:43 expired in the first period. Barkov, working from the left circle, passed up a shot and tossed the puck to Anton Lundell in the slot. Lundell gave it right back, and Barkov had an easy goal to the open left side of the net.

The Panthers closed the first period with a 19-9 shots-on-goal advantage.

Florida made it 2-0 with 15:50 gone in the second period as Gudas — not known for his scoring — unleashed a long blast past Reimer’s stick. It was his first goal of the year.

San Jose got on the board with 18:56 left in the third, scoring on a 5-on-3 power play after penalties on Gudas (boarding) and Gustav Forsling (delay of game for firing the puck over the glass).

Meier took advantage, scoring on a one-timer from the right circle; he fired the puck past the glove of a diving Bobrovsky.

San Jose tied the score on Karlsson’s goal with 13:26 left in the third. After a faceoff win, Karlsson scored from beyond the left circle.

Karlsson then got the primary assist, making a blind between-the-legs pass to Benning, who scored on a long shot from the point for a 3-2 Sharks lead.

The Panthers pulled Bobrovsky and got the tying goal by Verhaeghe on a bad-angle shot from below the left circle with just 1:22 left in the third, sending the game to overtime.