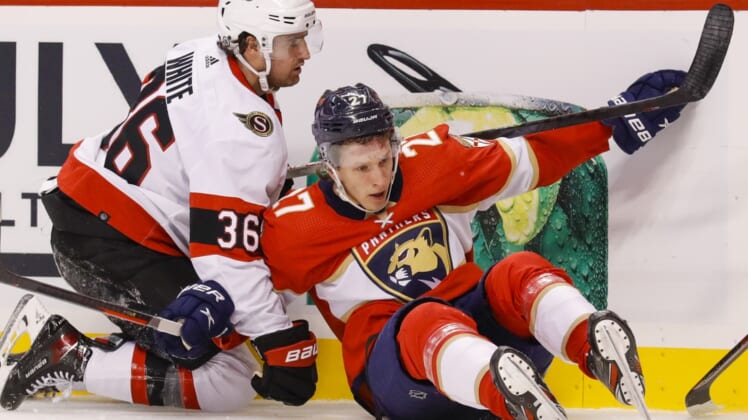 The Florida Panthers look to pad their lead atop the Atlantic Division when they visit the Ottawa Senators on Saturday night.

The high-flying Panthers sit seven points ahead of the Toronto Maple Leafs and Boston Bruins, and eight up on the Tampa Bay Lightning. They are 8-1-1 in their past 10 games after a 4-3 win over the Montreal Canadiens on Thursday. They have outscored opponents 40-22 during that stretch.

“The team’s excited,” said defenseman Ben Chiarot, who had an assist in his Panthers debut against his former Montreal teammates. “There’s a good swagger in the room, good energy. The guys are excited to play. A lot of good signs. It’s the sign of a good team when it has that energy, has that excitement, especially this late in the season.”

Huberdeau leads team with 88 points while his 67 assists lead the NHL.

“It’s a lot of fun to be a part of,” Reinhart said. “You’re able to conserve a lot of energy throughout the year and feel that much better more often. When you’ve got this many guys producing, I think it takes pressure off everybody.”

Goalie Sergei Bobrovsky, who has won each of his past four starts but hasn’t played since March 10, could get the nod. Coach Andrew Brunette said he will play this weekend but did not confirm which game. The Panthers visit Toronto on Sunday.

At the other end of the standings, the Senators are back home after a three-game road trip and looking to build off a 5-2 win against the Winnipeg Jets on Thursday. Ottawa scored four times in the third period to take the two points. It was the opposite of their 3-0 loss to the New York Islanders on Tuesday when the Senators allowed all three goals in the final frame.

“We stayed long enough with it, and we found a way,” coach D.J. Smith said. “It’s great to see we turned around and we learned (from Tuesday) and we stayed with it.”

While wins have been a struggle all season long, it’s been especially so of late. The Senators have emerged victorious just four times in their past 14 games, with all the losses coming in regulation. The club has been outscored 43-17 in those defeats.

“We don’t want to roll over for anybody, but we want to get some kind of identity with our work ethic,” Smith said. “Our last two games, it’s been there. We can’t give up a bunch of chances and expect to outscore teams. … We’re playing some really tough teams and we’re going to have to continue to defend to have a chance.”