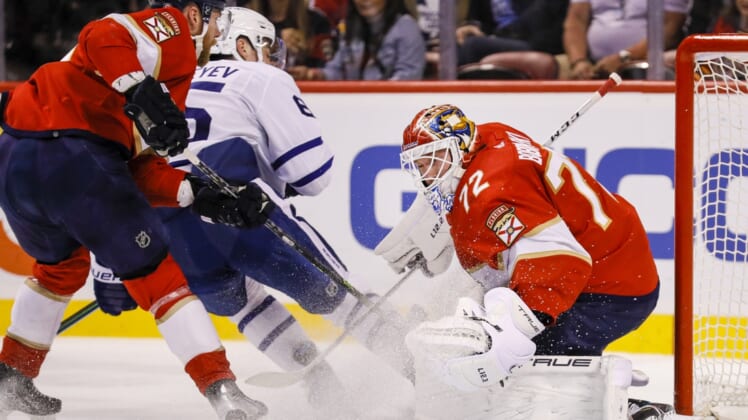 Montour scored his 10th goal of the season when he poked the puck past goaltender Jack Campbell at the end of a 2-on-1 with Mason Marchment, who had two assists in the game.

Both goaltenders were tested. Campbell stopped 32 shots for Toronto. Sergei Bobrovsky made 34 saves for Florida.

Auston Matthews returned to the Toronto lineup after missing three games with an undisclosed injury but was kept off the scoresheet.

The Panthers hit the post at 2:11 of the first period on a deflection of a shot by MacKenzie Weegar.

Marner scored his 35th goal of the season at 3:25 of the first period. The puck bounced to him off the end boards after Brodie dumped the puck in.

Holl scored his third goal of the season at 17:20 of the first. His shot toward the goal bounced off the stick and then the skate of Florida defenseman Radko Gudas.

Barkov scored his 39th goal of the season at 6:26 of the second period from the right circle after Campbell was forced to make a poke check on Marchment. The goal was set up when Marchment broke out from the Florida zone and split the defense in the Toronto zone.

Giroux scored his 21st of the season on a blast from above the right circle on a power play at 14:54 of the second. Jonathan Huberdeau set up the shot with a cross-ice pass. Brodie was off for hooking.

Toronto’s Michael Bunting (leg) left the game early in the first period and did not return.