Panthers rally from three goals down to edge Caps 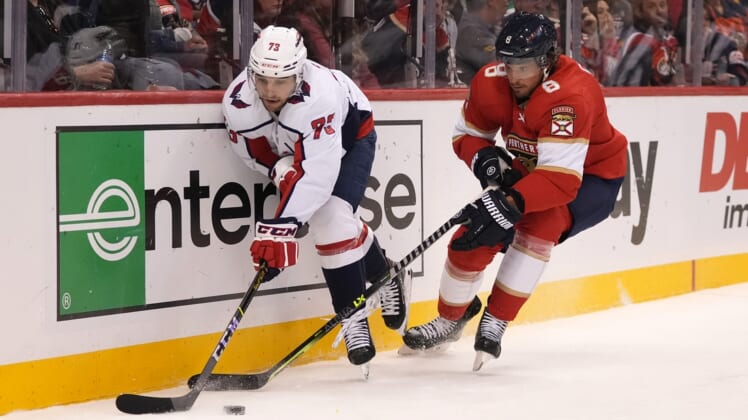 Carter Verhaeghe scored twice – including the go-ahead tally in the third period — and added three primary assists as the Florida Panthers rallied from a three-goal deficit to defeat the Washington Capitals, 5-3, on Wednesday night in Game 5 of their first-round playoff series at Sunrise, Fla.

The top-seeded Panthers lead the best-of-seven series 3-2. The eighth-seeded Capitals will host Game 6 on Friday night, hoping to stave off elimination.

Verhaeghe has set a team record with five goals in a playoff series. On his go-ahead goal with 16:56 left in the third, Verhaeghe’s backcheck stripped the puck from Capitals star Alex Ovechkin. Verhaeghe then passed ahead to Aleksander Barkov before finishing the 2-on-1 rush.

With 4:05 left, Verhaeghe’s pass led to Claude Giroux’s insurance goal on a 3-on-1 rush.

The Panthers also got goals from Patric Hornqvist and Sam Reinhart and two assists from Barkov.

Sergei Bobrovsky made 30 saves, holding the Capitals scoreless for the final 36:22.

The Panthers went 0-for-3 on their power play. For the series, they are 0-for-16 with the man advantage.

Washington opened the scoring on its power play with 7:09 expired in the first. After Verhaeghe was called for tripping Ovechkin, the Capitals went to work. Oshie got the goal, deflecting in a shot by John Carlson.

The Capitals made it 2-0 with just 2:13 gone in the second. Lars Eller’s hard blast was stopped by Bobrovsky, but he and defenseman Aaron Ekblad failed to secure the rebound. Schultz got to the puck instead, and he fired into a relatively empty net.

Just over a minute later, the Capitals extended their lead to 3-0. Connor McMichael pushed the puck ahead to give Washington a 2-on-1 rush. Kuznetsov’s pass led to Oshie’s second goal of the night.

But the Panthers dominated the rest of the second period, tying the score 3-3.

The comeback started when Florida’s Aleksander Barkov shot the puck wide, off the back boards, and Verhaeghe banged in the carom.

Less than six minutes later, Verhaeghe made another big play. After Carlson whiffed on the puck, Verhaeghe’s pass ahead sent Hornqvist on a breakaway. Hornqvist beat Samsonov glove-side.

Then, with 5:19 left in the second, it was Samsonov’s turn to fail to secure a loose puck. Reinhart capitalized, tying the score, 3-3.

After Verhaeghe put the Panthers on top 4-3, Ovechkin’s attempt to tie the score hit the right post with 8:40 left.