Panthers rally from 3 down, beat Senators in shootout 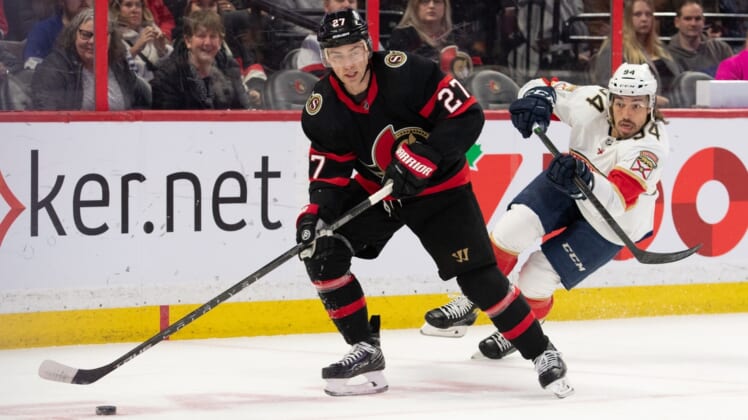 Aleksander Barkov tied the game in the closing minutes of regulation and scored the lone goal in the shootout, and the Florida Panthers rallied from a three-goal deficit for a 4-3 win against the host Ottawa Senators on Saturday.

With Sergei Bobrovsky pulled for the extra attacker, Barkov tied it 3-3 at 17:44 of the third period with a shot from the blue line through traffic.

Anthony Duclair and Patric Hornqvist also scored for Florida, and Claude Giroux had two assists for the second straight game. Bobrovsky made 19 saves, including two in the shootout, for his fifth straight win, in his first appearance since March 10.

Alex Formenton, Artem Zub and Dylan Gambrell scored goals for the Senators, and Anton Forsberg made 46 saves for Ottawa.

The Panthers had their legs going early, jumping out to a 6-0 shot advantage by the six-minute mark of the opening period.

However, the Senators struck first at 7:54 of the first period, shortly after recording their first shot on goal.

Formenton, on a breakaway, put Ottawa ahead 1-0 when he evaded a poke check by Bobrovsky and snapped the puck up top, his shot hitting the crossbar and Bobrovsky’s back before landing behind the goalie and rolling into the net.

Gambrell extended the lead to 3-0 at 6:47 of the second period. Tyler Ennis intercepted a Panthers clearing attempt inside the Florida blue line and skated up before sending it to Gambrell in the right circle.

Duclair got the Panthers on the board on the power play to cut it to 3-1 at 8:55, ripping a one-timer from the right circle off a feed from Claude Giroux.

Hornqvist narrowed it to 3-2 at 9:57 of the second on a play that required a lengthy review to confirm the goal.

Hornqvist, behind the net, got the rebound of his own shot and banked it off Forsberg’s back. Forsberg felt the puck and put his glove on the inside of the post and in the net in attempt to keep it out, but video review confirmed the puck was in his glove and crossed the goal line.