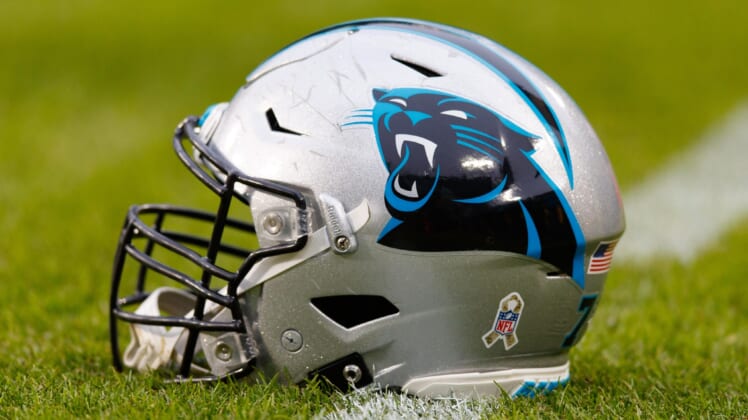 Nov 10, 2019; Green Bay, WI, USA; A Carolina Panthers helmet sits on the field during warmups prior to the game against the Green Bay Packers at Lambeau Field. Mandatory Credit: Jeff Hanisch-USA TODAY Sports

The Carolina Panthers back in March added Pro Bowl left tackle Russell Okung to the mix. The move was simple. Okung is expected to protect new quarterback Teddy Bridgewater’s blindside.

Though, there’s one major hiccup here. The 32-year-old two-time Pro Bowler missed 10 games with the Los Angeles Chargers last season with a pulmonary embolism due to blood clots. The nature of the ongoing pandemic around the United States has people such as Okung in the high-risk category. He’s now considering his options for the 2020 season.

According to ESPN’s Jeremy Fowler, Okung looked at the possibility of opting out of the 2020 NFL season due to COVID-19 concerns. As a high-risk player, the veteran left tackle would have received pay for the campaign. He’s now looking at potentially retiring altogether.

The report notes that Carolina could pursue his $2.5 million in signing bonus cash should Okung retire. That’s complicated by the fact that the former first-round pick received this bonus when he inked his current four-year, $53 million deal with Los Angeles back in March of 2017.

It’s hard to blame Okung for contemplating retirement. He previously noted that the above-mentioned health scare was a “wake-up-call.” There’s no reason to continue putting his health on the line.

As for the Panthers, this would be a major blow. Carolina traded Pro Bowl guard Trai Turner to Los Angeles for Okung during the spring. It does not have a legit in-house candidate to replace Okung at left tackle.