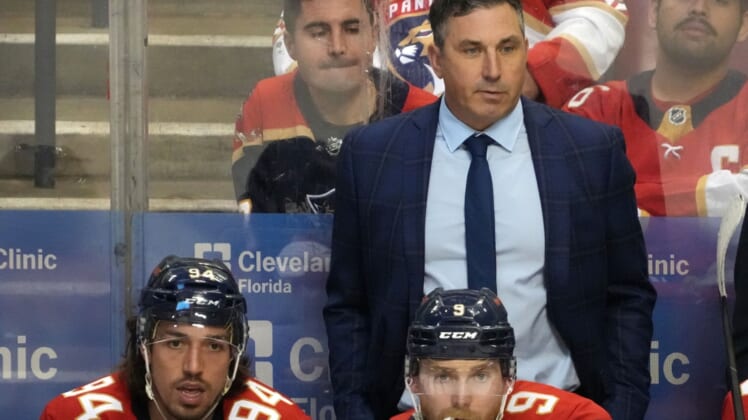 Gustav Forsling scored 1:45 into overtime as the Florida Panthers overcame a four-goal deficit to post a 7-6 win over the New Jersey Devils on Saturday afternoon in Newark, N.J.

Florida trailed 6-2 in the third period before Brandon Montour and Forsling scored 1:29 apart to halve the deficit. Captain Aleksander Barkov scored with 4:37 remaining and again with goalie Spencer Knight for an extra attacker with 1:24 left to forge a 6-6 tie.

Forsling completed his two-goal performance by scoring on a rush to win the game.

Five of Florida’s goals were scored by its defensemen, including two by Forsling and one each from Ben Chiarot, Radko Gudas and Montour. It was Chiarot’s first goal with the Panthers, who acquired him from the Montreal Canadiens at the deadline.

Hammond, 34, made just his ninth start in the past three years.

This season, Hammond is 3-0-1 despite being traded by both the Minnesota Wild and Canadiens. He was activated off the injury list on Saturday, becoming the franchise-record seventh goalie used by the Devils this season.

Knight earned the win, stopping all six shots he faced.

The Devils forged a 2-0 lead before Hammond faced his first shot.

Sharangovich and Hughes got those first two goals 17 seconds apart within the game’s first four minutes.

The first period ended 2-1 as Chiarot’s goal cut Florida’s deficit. Panthers rookie Anton Lundell, returning from an injury that had kept him out since March 7, tried a wraparound that was stopped by Hammond. The rebound came out to Chiarot, who fired it past a scrambling Hammond.

The Devils dominated the second period to take a 6-2 lead.

However, within the first 7:03 of the third, Montour and Forsling scored to cut Florida’s deficit to 6-4. Carter Verhaeghe nearly made it 6-5 with his deflection, but that was wiped out by his high stick.