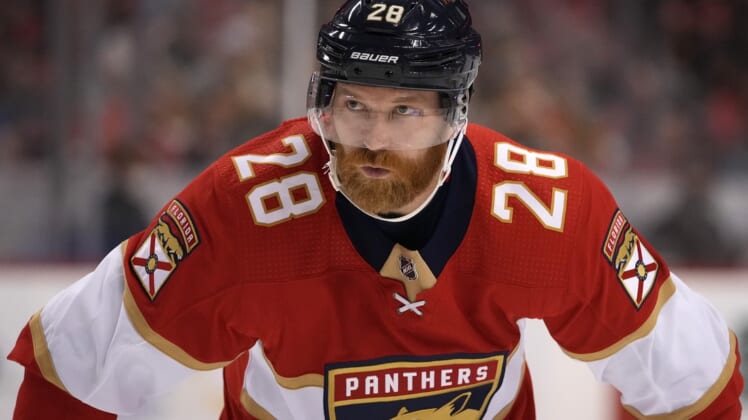 The Florida Panthers look to keep surging ahead on Saturday afternoon when they visit the New Jersey Devils in Newark, N.J.

The Atlantic Division-leading Panthers (46-15-6, 98 points) shut out the Chicago Blackhawks 4-0 on Thursday to set a franchise record in home victories (28) this season.

Panthers goaltender Sergei Bobrovsky owns a 33-6-3 record overall, but he has been especially dominant at home (21-3-0).

“We have unbelievable support,” Bobrovsky said. “The building energizes us. It’s so much fun to play at home.”

Now, Bobrovsky and company will take their show on the road.

Bobrovsky, who is in the third season of his seven-year, $70 million contract, is having his best campaign since his days with the Columbus Blue Jackets. The two-time Vezina Trophy recipient needs three wins to break Roberto Luongo’s Panthers record for single-season victories, set in 2005-06 and matched in 2015-16.

Offensively, captain Aleksander Barkov leads the Panthers in goals (31). He has 68 points in just 54 games, and he needs five goals to break his career high set in 2018-19.

One of those really good players is Jonathan Huberdeau, who on Thursday set an NHL record for left wingers by collecting his 71st assist of the season. The previous record of 70 was set by the Boston Bruins’ Joe Juneau in 1992-93.

Meanwhile, the Devils (24-38-5, 53 points) were routed 8-1 by the Boston Bruins on Thursday. Boston scored those eight goals in the game’s first 36 minutes and 12 seconds, including seven straight tallies.

“There are a lot of things we can learn from that game,” Devils coach Lindy Ruff said. “We’re going to have to talk about puck management again.

“But nobody’s outside of this. We all have a part of this one.”

The Devils have lost nine straight road games — all of them in regulation — and haven’t won away from home since Feb. 24.

New Jersey, however, has won three straight home games, including two in shootouts.

Jesper Bratt, who had his career-best seven-game point streak ended on Thursday, leads the Devils in assists (43) and points (65).

Jack Hughes, who had the lone goal against Boston, is second on the Devils with 55 points. Hughes, the No. 1 overall pick in the 2019 NHL Draft, won’t turn 21 until next month. But despite his youth, he leads the Devils with 25 goals.

Captain Nico Hischier, 23, is another core player for the Devils. The first overall pick in the 2017 NHL Draft, Hischier has 18 goals and 30 assists. He needs five points to break his career high set in his rookie season of 2017-18.

Defensively, the Devils have used a lot of goalies, six of them in fact.