Panthers look to channel anger vs. Capitals in Game 4 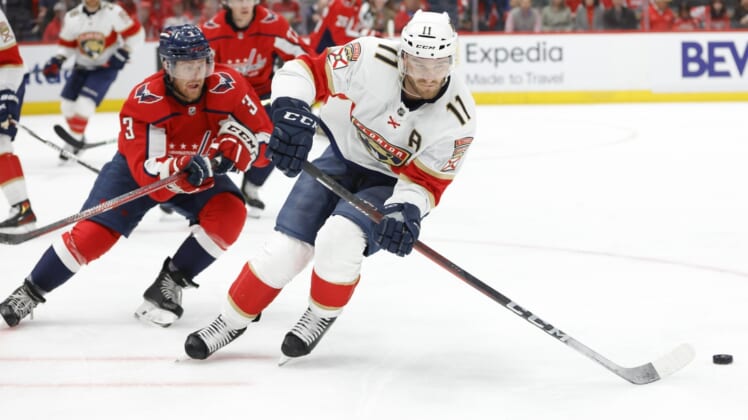 It had been nearly four months since any team had held the Florida Panthers to one or fewer goals.

The Washington Capitals, who accomplished that feat on Saturday afternoon, will try again Monday night when they host the Panthers in Game 4 of their first-round Eastern Conference playoff series.

Washington leads the best-of-seven series, 2-1, thanks in part to goalie Ilya Samsonov, who has stopped 46 of the 47 shots sent his way in the series. Samsonov played the third period in Thursday’s Game 2 loss and got the start in Saturday’s 6-1 win, his first-ever playoff victory.

The Capitals now need just 14 more victories after holding the Panthers to their fewest goals since a 5-1 loss at Calgary on Jan. 18.

Florida had the NHL’s best regular-season record. But the Panthers haven’t looked consistently sharp against the eighth-seeded Capitals, who still have a core of players remaining from their 2018 Stanley Cup championship team.

“A little bit of nervousness,” interim coach Andrew Brunette said of his Panthers. “Our power play hasn’t been as smooth as it normally is, but we’ll figure it out.

“As a 20-man group, we have to play better. Regardless of what you draw up, if you don’t play better, it doesn’t matter.”

The power play has separated these teams. Washington, led by superstar Alex Ovechkin, is 4-for-11 with the man advantage in this series.

The Panthers, led by Jonathan Huberdeau and his team-high 115 points in the regular season, are 0-for-9 on the power play in this series.

Huberdeau, who had the Panthers’ only goal on Saturday, now has 18 playoff points in his career, tying Ray Sheppard for the most in franchise history.

Washington’s T.J. Oshie made some history of his own on Saturday, scoring his 14th postseason power-play goal. That moved him past Peter Bondra for second place in Capitals history, trailing only Ovechkin (28).

Look for some added grit from the Panthers, who feel like they didn’t give it their best effort in Game 3 even though they outhit the Capitals, 49-44.

“We weren’t ready to play (on Saturday),” Panthers defenseman Brandon Montour said. “Our energy level — we can say as much as we want in the locker room, but we get on the ice, and I don’t think we were on it.

“(The Capitals) have strategies to cover us, but we have to fight for every inch. We have to play harder. That’s where it starts. We have to dictate the pace of play.”

Brunette was asked how he wants his team to respond on Monday.

“Hopefully mad,” Brunette said. “Hopefully we can channel our anger and compete on pucks.

“The story written so far in this series is that we have been outcompeted and outwilled on nearly every puck battle. It’s something we will have to figure out.”