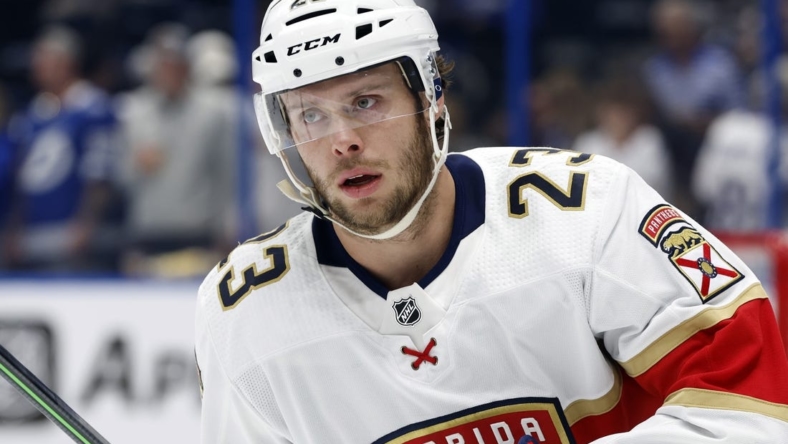 Considering the way the Panthers have fared against the Ducks of late, a visit to Anaheim, Calif., might be what Florida needs to rebound from another frustrating road setback.

The road-weary Panthers will aim for a fifth consecutive victory over the Ducks on Sunday night.

Florida has played eight of its 12 games on the road and is 3-5-0 in those contests. After Thursday’s 4-3 shootout win at San Jose, the Panthers blew a pair of leads, and allowed the winning goal late in the third period, of a 5-4 loss at Los Angeles on Saturday.

The Panthers have allowed 24 goals during their past six road games.

“It (stinks) losing, and we’re going to come back (Sunday) and be better,” said Florida’s Carter Verhaeghe, who scored twice Saturday to raise his season goal total to seven. “Getting some recovery. Forgetting about (Saturday’s loss) and just moving on.”

It was the third multi-goal game this season for Verhaeghe, who has scored five times in the past four contests. He doesn’t have any goals but has recorded two assists in his only three career games against the Ducks.

After Sergei Bobrovsky (3.29 goals-against average) stopped 34 of 39 shots on Saturday, Spencer Knight could start in net for the Panthers. Knight has a 2.53 GAA while winning three of his four starts this season.

Knight’s first career shutout came when he needed to stop only 17 shots during the Panthers’ 3-0 victory at Anaheim on March 18. Florida owns a 15-7 scoring advantage while winning four straight against the Ducks.

Though the Panthers should feel confident knowing their recent track record in this series, Anaheim has won three of its past four following an 0-6-1 skid.

Down by two goals in the final five minutes of regulation at San Jose on Saturday, Anaheim got goals from Mason McTavish and Adam Henrique to force overtime. Both scored in the shootout for the 5-4 Anaheim victory.

“We looked like a tired team (Saturday),” Ducks coach Dallas Eakins told Bally Sports West. “But I think our guys did a great job, just hanging in there. … We just need to be more connected. Especially with the puck. We’re not supporting each other very well.”

Anaheim got 48 saves from Anthony Stolarz against the Sharks, but John Gibson could be back in net for just the team’s fourth home game in 13 this season. Gibson, who allowed seven goals during Thursday’s 8-5 loss at Vancouver, has a 4.58 goals-against average while winning just two of his nine starts for the Ducks.

Gibson’s also posted a 3.46 GAA while starting every game during Anaheim’s current 0-2-2 rut vs. Florida.

With two assists Saturday, teammate Trevor Zegras, who also scored in the shootout, has seven of his 12 points in the past four games.