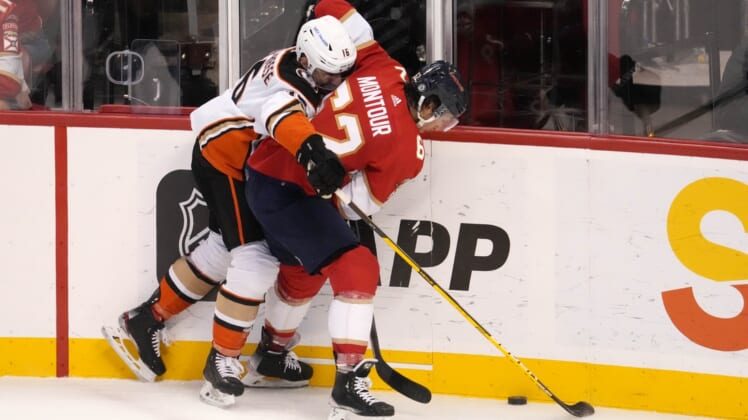 It was Florida’s eighth straight win, tying their best streak of the season.

On the game-winner, Huberdeau stole the puck in the Ducks’ zone, and he scored on his own rebound for his 28th goal of the season.

The Panthers (52-15-6) lead the Eastern Conference with a franchise-record 110 points.

Despite the loss, Ducks goalie John Gibson was sensational with a career-high 53 saves as the Ducks fell to 29-33-13. They have 71 points.

Sergei Bobrovsky made 22 saves for the Panthers.

Anaheim got goals from Troy Terry and Derek Grant. For Terry, it was his team-high 33rd goal of the season. Grant also had an assist.

Florida outshot the Ducks 17-4 in the first period. Yet it was the Ducks who led 1-0 after the opening 20 minutes.

In fact, the Ducks scored on their first shot on goal, which occurred with 7:38 gone in the first. Grant, working from behind the Panthers’ net, passed to Trevor Zegras, whose lateral feed led to Terry’s goal.

Florida tied the score with 1:44 expired in the second period. Duclair got credit for the goal when his attempted pass to Aleksander Barkov bounced in off the left skate of Ducks defenseman Jamie Drysdale.

With 2:36 left in the second, Drysdale got his revenge, making a nice move to elude a Panthers defender and putting a shot toward the net, where it was deflected in by Grant, giving the Ducks a 2-1 lead.

The Panthers tied the score 2-2 on Duclair’s power-play goal with 9:51 left in the third. Sam Reinhart set up the goal with his pass that went under Gibson’s stick. Once the puck got to Duclair, the right side of the net was open.