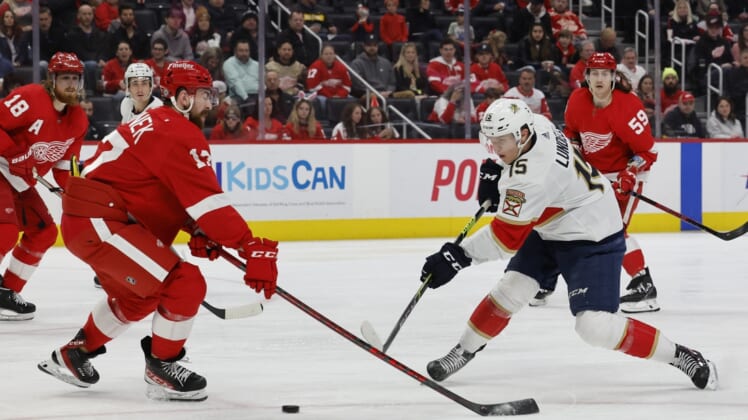 The Florida Panthers will look to extend the NHL’s longest active winning streak to 11 games when they visit the New York Islanders on Tuesday night.

“I didn’t even realize we had gotten to 10,” Panthers coach Andrew Brunette said. “I just know I have really liked the way we have played in the last three or four games. We’re bringing our top game every night and when we do that, we’re tough to beat.”

The winning streak is the second-longest in team history behind a 12-game run from Dec. 15, 2015, to Jan. 10, 2016. Florida leads the Eastern Conference in points and is vying for the President’s Trophy along with the Colorado Avalanche.

The Panthers visit the Islanders after setting a franchise record by earning their 50th road point of the season. Florida is 18-5-2 away from home since Jan. 1.

“We seem to have taken another step and are playing much better on the road in the second half of the season,” Brunette said. “And you’ve got to win on the road to win the big Cup.”

Rookie Anton Lundell scored twice against the Red Wings and has 43 points (18 goals, 25 assists) in 60 games.

Sam Reinhart had a goal and an assist versus Detroit and has a six-game point streak (four goals, seven assists).

The Islanders (35-31-9, 79 points) find themselves in an unfamiliar position under coach Barry Trotz — playing out the string. After three consecutive playoff appearances, the Islanders were eliminated from postseason contention with a 4-2 loss to the Toronto Maple Leafs on Sunday.

“It’s disappointing,” Ryan Pulock said. “Obviously we knew a couple of months ago that we had dug ourselves a hole and we’re going to have to fight to the end to try to get ourselves out of it.”

New York, which had gone to the third round of the playoffs in each of the past two seasons, was done in by a poor start in this campaign. An 11-game losing streak Nov. 7-Dec. 5 put them in an early hole and even their recent strong play — 14-7-1 in their past 22 games — couldn’t get them within reach of the second Eastern Conference wild card.

“We’ve had this discussion as we knew what the odds were, and all that,” Trotz said. “So, I think we’ve come to a realization a while ago, but we’re just going to continue to play. This group will play to the end.”

Anthony Beauvillier, who had gone nine games without a point, and Josh Bailey scored for New York against Toronto. Ilya Sorokin made 33 saves in his fourth straight start and third game in four days as goalie Semyon Varlamov missed his second straight game with a stomach illness.

The Islanders play five of their final seven games at home.