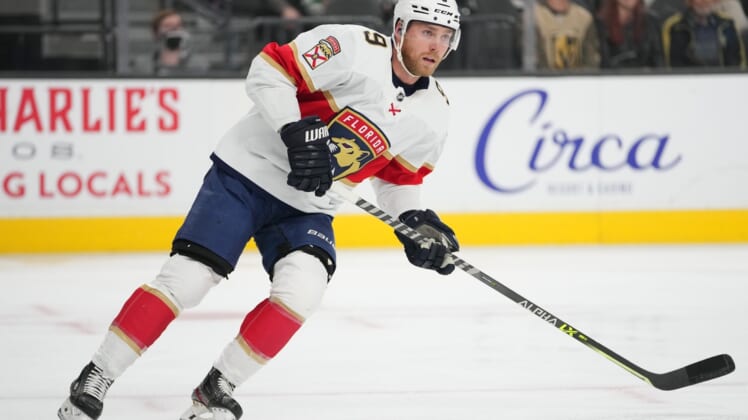 However, the Panthers have one more chance to make things picture perfect when they visit the Anaheim Ducks on Friday night.

The Eastern Conference-leading Panthers are 1-1-1 on the Western swing after a 5-3 loss to the Vegas Golden Knights on Thursday snapped their seven-game point streak (6-0-1). Florida opened the trip with a 3-2 shootout loss on Sunday to the Los Angeles Kings, then beat the San Jose Sharks 3-2 in overtime on Tuesday.

The Panthers rallied from a two-goal deficit to forge a third-period tie in Las Vegas, only to see the Golden Knights score on a breakaway less than a minute later and add an empty-net goal.

“They were the most desperate team, they wanted it more,” Florida interim coach Andrew Brunette said.

Following the Friday game, the Panthers will wrap up the trip with stops Thursday in Montreal, March 26 in Ottawa and March 27 in Toronto.

Florida hopes to welcome newly acquired defenseman Ben Chiarot to the lineup for the game against the Canadiens. The Panthers got Chiarot in a deal with Montreal on Wednesday night, giving up unsigned forward prospect Tyler Smilanic and two draft picks.

“The Panthers have been one of the top teams all year,” Chiarot said. “As we showed (in Montreal) last year, you get into the playoffs, anything’s possible. You just have to get in, and Florida’s done that and more. They have a powerful team and they have as good a chance as anyone.”

“It’s no secret that our top defensemen right now are logging big minutes,” Zito said. “And certainly I think the addition of Ben can help lessen those minutes, spread them out, and hopefully add some collective energy to our entire ‘D’ corps.”

Ekblad assisted on all three goals Thursday to break the franchise record for most career points by a defenseman (291). He passed Robert Svehla, who had 290 points for the Panthers from 1994-95 to 2001-02.

“It’s been a fun ride so far,” Ekblad said. “I’ve learned a lot along the way and I wouldn’t be anywhere near that without my teammates. As much as it’s an individual accomplishment, it’s a team accomplishment.”

The Ducks return home after going 0-3-2 on a five-game trip to Chicago, Nashville, New Jersey and New York, where they faced both the Islanders and Rangers. They capped the trip with a 4-3 overtime loss Tuesday vs. the Rangers.

“The first game (an 8-3 loss to the Blackhawks) was an absolute debacle and our last two games here our guys have played hard, they’ve played hard for each other,” Anaheim coach Dallas Eakins said. “(In the latest defeat,) against a really good team, we checked well, we had our chances.”

The Ducks blew leads against both the Islanders and Rangers and dropped five points back in the chase for a Western Conference wild-card playoff berth.

“It’s a tough trip overall,” said Anaheim center Adam Henrique, who had two assists on Tuesday. “They strike on a late power play to tie it up and obviously take it in overtime. We had our opportunities, tough one to let get away.”