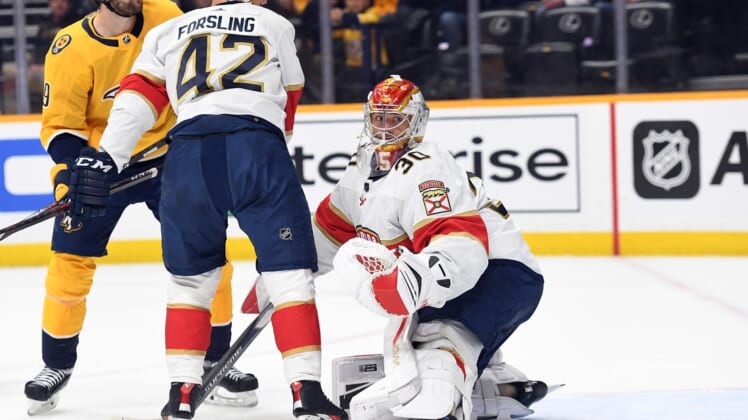 Anton Lundell scored the go-ahead goal in the second period and Spencer Knight made 24 saves as the visiting Florida Panthers defeated the Nashville Predators 4-1 on Saturday for their seventh consecutive win.

Jonathan Huberdeau scored an empty-net goal with 67 seconds left to ice the game and extend his points streak to 11 games. Florida got another empty-netter from Gustav Forsling with 50 seconds left.

The Panthers (51-15-6, 108 points), who lead the Atlantic Division, also got a goal from Carter Verhaeghe and two assists from Sam Reinhart.

The Panthers, who have already clinched a playoff berth, have the highest-scoring offense in the NHL, but the hard-checking Predators held Florida down for most of the game.

Nashville (41-25-4, 86 points) got a goal from Ryan Johansen plus 21 saves from Juuse Saros. The Predators have won four of their past six games as they battle for a playoff spot.

Florida opened the scoring with 3:43 gone in the first period. The Panthers, who had an extra skater on the ice due to a delayed penalty, got the goal on Verhaeghe’s blast from the left circle, which was set up by Brandon Montour.

The Predators tied the score just over two minutes later as Filip Forsberg’s touch pass from behind the net connected with Johansen, who scored from the slot.

Nashville nearly went up 2-1 with 12:40 left in the second period. Forsberg stole the puck and had a breakaway before getting stoned by Knight.

The Panthers then went up 2-1 on Lundell’s bad-angle goal with 4:44 left in the second. Lundell took a drop pass from Reinhart and shot high, somehow squeezing the puck over Saros.

The Panthers then expanded the margin in the game’s final minutes, improving to 35-0-1 when leading after two periods.