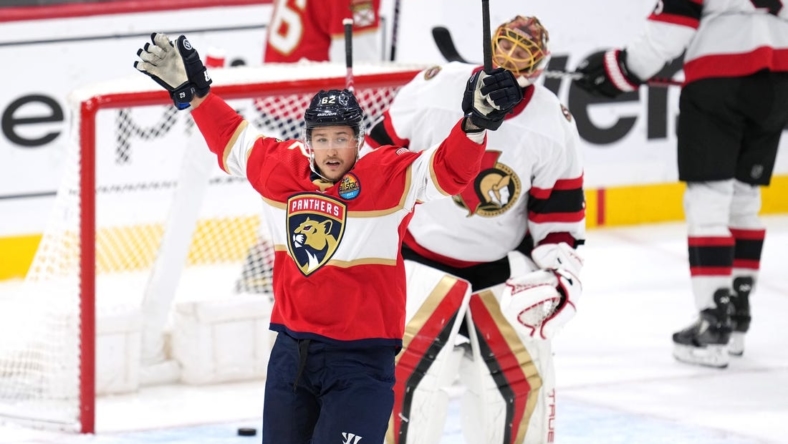 Brandon Montour, Aleksander Barkov and Matthew Tkachuk each had a goal and two assists in the Florida Panthers’ 5-3 win over the visiting Ottawa Senators on Saturday afternoon.

Carter Verhaeghe scored the other two goals, and Spencer Knight made 23 saves for the Panthers, who ended a two-game losing streak.

Nick Holden had a goal and an assist, and Shane Pinto and Brady Tkachuk also scored for the Senators, who have lost two in a row following a four-game win streak. Anton Forsberg made a career-high 53 saves.

Montour scored on a one-timer from the top of the right circle with 3:32 left to give Florida a 4-3 lead. Matthew Tkachuk scored into an empty net with 14 seconds left.

Florida outshot Ottawa 26-4 in the first period while building a 2-0 lead.

Verhaeghe scored the first goal of the game off a spinning backhand pass from Matthew Tkachuk at 7:59.

Barkov, who led the Panthers with a career-high 39 goals last season, scored his first of the season with a wrist shot from top of the right circle with 11 seconds left on a power play, stretching the lead to 2-0 at 11:54.
.
The Panthers had 19 straight shots on goal before Knight made a save on a long-range shot just as the first period ended.

Ottawa scored on two of its first four shots of the second period, however.

An Ottawa power play continued into the second period, and Pinto took advantage to make it 2-1 just 37 seconds into the period. It was his sixth goal of the season.

Brady Tkachuk tied it 2-2 at 3:23, scoring with a wrist shot while coming down the left wing.

Verhaeghe provided the Panthers with a 3-2 lead with a one-timer from the top of the right circle with 37 seconds left in the second period. He appeared to stretch the lead to 4-2 with 11:01 left, but a review showed the Panthers were offsides before the goal.