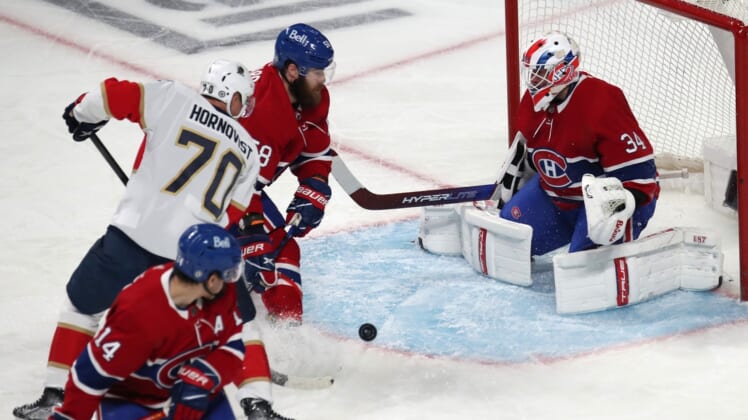 Aleksander Barkov, Mason Marchment, Anthony Duclair and Sam Reinhart scored for the Panthers, who lead the Atlantic Division and are 8-1-1 in their past 10 games.

Florida’s Jonathan Huberdeau, who leads the NHL in assists, added two more to his total, giving him 67. Giroux also had two assists, and Chiarot and Hagg had one each.

Nick Suzuki, Jake Evans and Paul Byron scored for the Canadiens, who are last in the Atlantic. Montreal goalie Jake Allen made 38 saves.

Spencer Knight, who went more than one month without playing (from Feb. 1 to March 7), made 28 saves. It was his sixth start this month.

Panthers goalie Sergei Bobrovsky, who took a puck to the face while sitting on the bench earlier this month, hasn’t played since March 10.

But Florida got forwards Patric Hornqvist and Ryan Lomberg off the injured list.

The first period provided two goals in the first minute and none the rest of the way.

Montreal took advantage of a roughing penalty on Huberdeau 20 seconds in, turning that into Suzuki’s power-play goal just nine ticks later. Suzuki scored on a wrist shot after taking a pass from rookie Cole Caufield.

Seven seconds later, Florida tied the score on a breakaway goal from the left circle, ringing his shot in off the right post. Hagg and Giroux got the assists and their first Panthers points.

Florida took a 2-1 lead just 72 seconds into the second. The play started when Montreal’s Corey Schueneman slipped and lost the puck. Marchment pounced and scored on his second shot — a wraparound rebound.

With 5:59 gone in the second, Montreal tied the score 2-2 on Evans’ deflection of an Alexander Romanov shot. Former Panthers forward Mike Hoffman had the secondary assist.

Duclair’s deflection with 7:06 gone in the second gave Florida a 3-2 lead. Chiarot had the primary assist.

Reinhart’s power-play goal on a pass from Huberdeau gave Florida 4-2 lead with 12:40 left in the third.

Montreal — after having pulled Allen for an extra attacker — cut its deficit to 4-3 on Byron’s goal from the doorstep with 3:40 left.

But the Panthers held off Montreal from there.