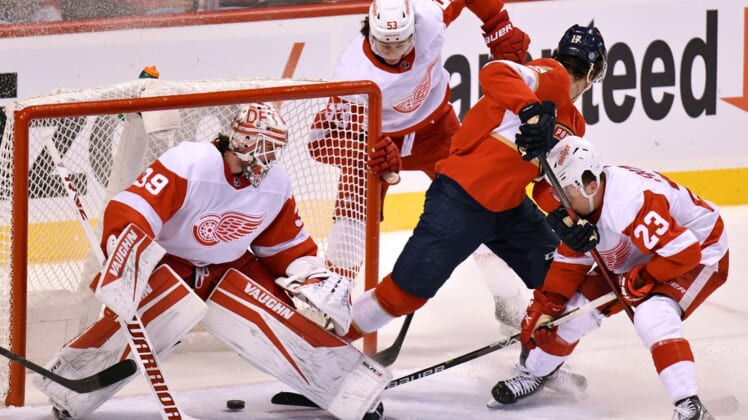 Mason Marchment had a goal and an assist as the Florida Panthers extended their winning streak to a franchise-tying 12 games in a 5-2 victory over the Detroit Red Wings on Thursday in Sunrise, Fla.

Their last loss was a 5-2 setback on March 27 in Toronto against the Maple Leafs, whom they host Saturday.

Aleksander Barkov and Sam Reinhart netted power-play goals, and Noel Acciari and MacKenzie Weegar scored for the Panthers (56-15-6, 118 points), who won for the 10th consecutive time at home where they are an NHL-best 33-6-0.

Jonathan Huberdeau’s two assists evened him with Edmonton’s Connor McDavid for the league lead in points with 113.

Sergei Bobrovsky made 28 saves for his 38th triumph to tie Nashville’s Juuse Saros for the NHL lead.

The Red Wings (30-38-10, 70 points) got goals from Sam Gagner and Tyler Bertuzzi and two assists from Pius Suter.

Detroit started fast with Gagner’s wrister from the slot at 4:08 for his 13th tally, but Acciari — scratched in the last 10 games — tied it at 9:19 with his second goal.

With 21 seconds remaining in the first period, Marchment was credited with his 17th marker after Detroit’s Lucas Raymond got his stick on the puck on a rush that stalled in front of Nedeljkovic.

In the second, Bertuzzi notched a spinning goal when he fired one in at 6:15 to make it 3-2. With 28 goals, the left wing is Detroit’s active leader with Dylan Larkin (31 goals) out for the season.

But Florida held the territorial edge after Bertuzzi scored, cycling the puck in the offensive end and pushing it to 4-2 when Marchment won a board battle and fed Weegar for his eighth at 16:05.

Reinhart added his 29th tally on the power play in the final period to round out the scoring.