Panthers could be ‘sleeper’ team for Philip Rivers? 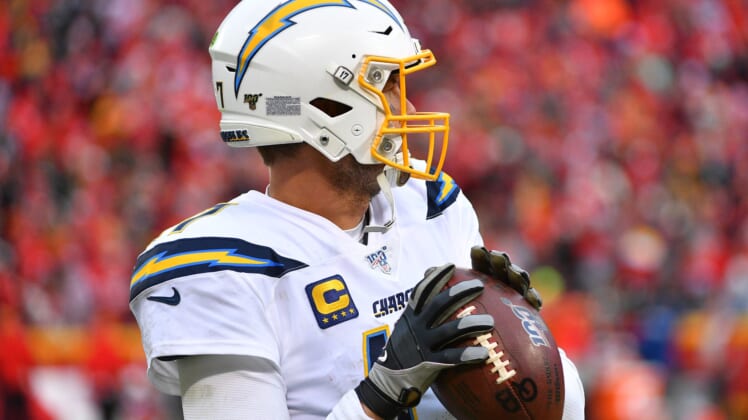 After parting ways with the Los Angeles Chargers, quarterback Philip Rivers becomes one of the top free-agent quarterbacks available. While he’ll have plenty of suitors this offseason, the Carolina Panthers could reportedly emerge as a surprise option to sign Rivers.

The Tampa Bay Buccaneers and Indianapolis Colts are expected to make a strong push for the Pro Bowl quarterback. However, NFL.com’s Daniel Jeremiah shared on Ian Rapoport’s podcast that the Panthers could be a sleeper to land Rivers.

A potential move would certainly mean the end of an era for Cam Newton in Carolina. The star quarterback is reportedly on the trade block and Panthers owner David Tepper recently questioned Newton’s health.

The Panthers could trade Newton for draft picks then either use their first-round pick to draft Justin Herbert or potentially target Jalen Hurts in the second round. It would give offensive coordinator Joe Brady time to develop the rookie, while Rivers is on the field helping the team compete with an offense that can win in 2020.

Tampa Bay and Indianapolis will likely remain the favorites to sign Rivers. If the Panthers want to, though, their offense could be perfect for the 38-year-old quarterback to end his career with some big numbers.