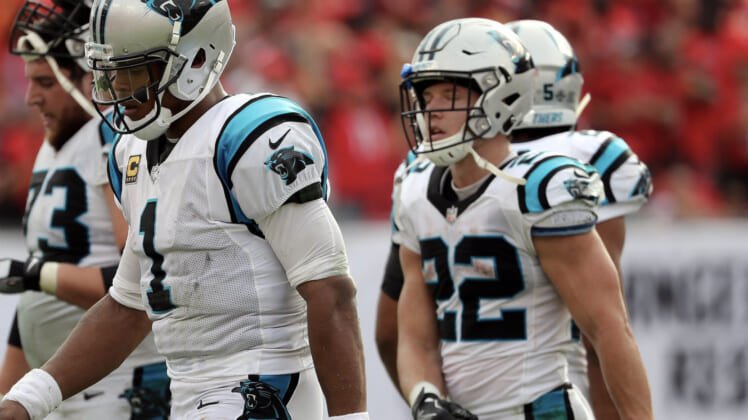 Carolina Panthers quarterback Cam Newton is continuing to rehab from a shoulder surgery to his throwing arm he underwent four months ago. And as of now, the 30-year-old quarterback has yet to resume throwing a football.

While there currently is no timetable for Newton to start throwing again, head coach Ron Rivera doesn’t seem to be too concerned.

“It’s a really big not-that-big-of-a-deal,” head coach Ron Rivera said, per Bryan Strickland of the team’s official website. “With the exception of throwing the ball physically, he does everything else.”

The team reportedly feels confident that Newton will be ready to play by the start of the 2019 season.

In the meantime, rookie quarterback Will Grier and backups Taylor Heinicke and Kyle Allen will be the guys slinging the ball to the Panthers receiving corps at OTAs.

Rivera added this about Newton’s overall health at this point.

“I’m optimistic. I think he’s done a great job. Everything that I’ve seen tells me that he’s doing a great job.”

Newton is preparing to enter his ninth year in the league and has missed only five games throughout his career.

Hopefully, he will be cleared to play once Week 1 rolls around.