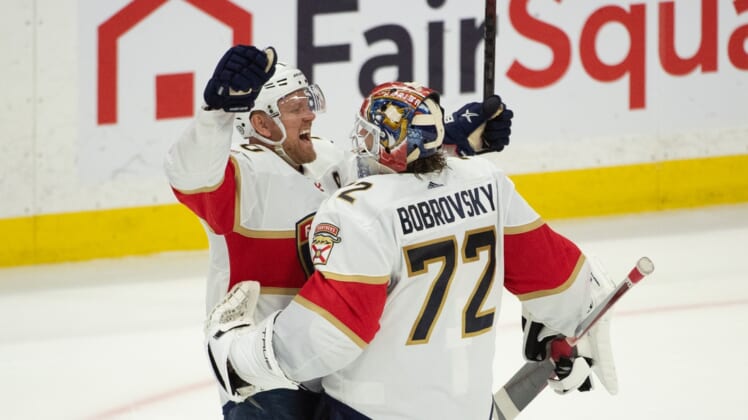 The Eastern Conference-leading Florida Panthers will complete a seven-game road trip Sunday night when they oppose the Toronto Maple Leafs.

It will be the first of three meetings between the teams this season, all packed in a four-week span.

Both teams are coming off tight games Saturday against non-contenders.

The Panthers defeated the Ottawa Senators 4-3 in a shootout to improve to 9-1-1 in their past 11 road games. Florida has won three in a row overall.

The Maple Leafs lost 4-2 to the host Montreal Canadiens, despite having an enormous 51-18 advantage in shots on goal. The loss was just Toronto’s second in five games.

Toronto’s Auston Matthews scored his league-co-leading 47th goal 36 seconds into the first period on Saturday. In matching his career best in goals for a season, he reached a career-best 81 points.

“Not all the shots we got are of high quality. There is a lot of perimeter stuff there. We had more than enough chances to score more than we did. Didn’t make good on some of our stuff around the net, and we didn’t get much luck.”

The Panthers got two assists Saturday from Claude Giroux, who was obtained from the Philadelphia Flyers before the trade deadline. Giroux has four assists in two games with Florida.

Giroux’s second assist on Saturday, after he won a faceoff, came on captain Aleksander Barkov’s tying goal at 17:44 of the third period as the Panthers completed their rally from a 3-0 deficit.

“He’s really good at (faceoffs)” Barkov said. “You can talk about different plays when he’s taking faceoffs because there is a good chance that he’s winning it and obviously we have a lot of skilled players to make the plays there.”

Giroux won 13 of 20 faceoffs in the Panthers’ come-from-behind win.

“We know that we’re going to come back,” Barkov said. “Nobody even had one thought that we were going to lose this game. We just needed one goal to get us going.”

Panthers interim coach Andrew Brunette added, “I think we felt we were in a pretty good position with the way we were playing. Had some unlucky bounces. Get behind by three. We knew if we could get the next one, we could gain a little momentum. We’ve done it all year. There is a good self-belief.”

Mrazek, who has struggled, cleared waivers on Monday, then made 20 saves in the 3-2 win over the New Jersey Devils on Wednesday.

“In my opinion, Mrazek is coming off what was his best start of the season,” Keefe said before the Saturday game, “in terms of how he competed, how he played in the net and how confident and focused he looked. He followed that up with a great practice (Friday).”

Keefe is also optimistic about Campbell based on work in practice and feels the 2022 All-Star is going “to come back strong and he is not far away from being back in the net for us. …

“I believe we are on the right side of our goaltending situation in terms of finding traction. Like we have talked about all season long, when we defend well as a team, it sets our goalies up for success. So that goes hand in hand and will continue to be our focus.”