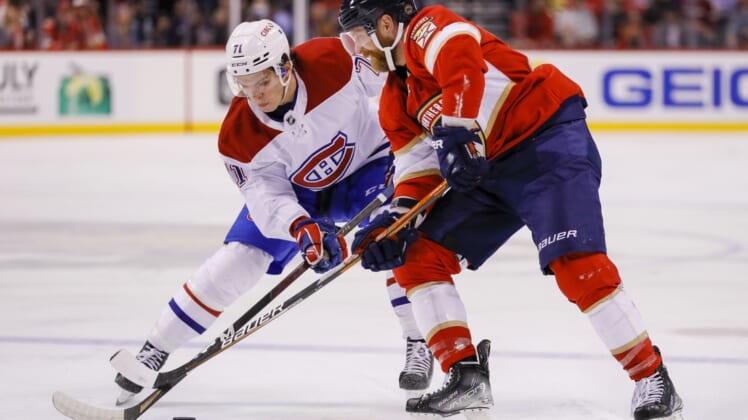 Jonathan Huberdeau scored the go-ahead goal with 18:41 left in the third period, leading the Florida Panthers to a 7-4 win over the Montreal Canadiens on Tuesday in Sunrise, Fla.

Huberdeau also scored short-handed earlier in the game, and he had an assist for the Panthers, who blew a 4-1 lead before netting the game’s final three goals.

Florida’s Ryan Lomberg, who entered the night with eight career goals in 89 games, produced his first career two-goal game and added an assist.

The Panthers also got one goal and two assists from Sam Bennett, a goal and an assist from Aleksander Barkov and a goal from Mason Marchment. Sergei Bobrovsky made 20 saves to win his sixth straight contest.

Montreal got a goal and an assist apiece from Chris Wideman and Laurent Dauphin, and Joel Edmundson and Christian Dvorak also scored. Jake Allen stopped 39 shots.

Canadiens center Jake Evans sustained an unspecified injury with 7:52 left in the third. With Montreal short-handed, Evans had a breakaway shot that was stopped, but he was pushed by Florida’s MacKenzie Weegar hit the end boards hard. Play was stopped for a couple of minutes.

Despite the loss, the last-place Canadiens are much improved since Feb. 17, going 10-5-4.

The first-place Panthers notched their league-leading 27th home win of the season.

The biggest negative on the night for the Panthers was the loss of forward Noel Acciari, who sustained an apparent injury in the first period.

Montreal scored on its first shot on goal, just 2:32 into the game. Jesse Ylonen took a stretch pass to create an odd-man rush. He then dished to the trailing Wideman, who scored from the slot.

Montreal closed the second period with three goals in 1:42, tying the score 4-4. Those goals came from Edmundson, Dauphin and Dvorak.

Florida regained the lead on a play that started with Bennett and Huberdeau winning a battle along the boards, forcing a turnover that was gobbled up by Lomberg. From there, Lomberg fed Bennett, who spun around and dished to Huberdeau for the point-blank goal.