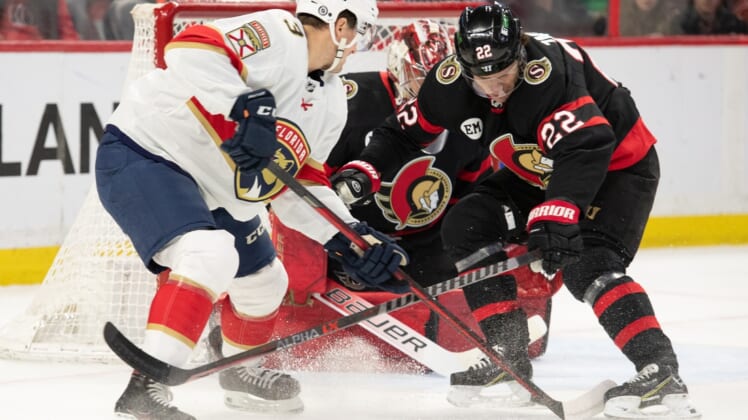 Spencer Knight made 27 saves for the visiting Florida Panthers in a 4-0 win against the Ottawa Senators on Thursday night.

Carter Verhaeghe scored two goals and Sam Reinhart and Sam Bennett each had a goal and an assist for the Panthers (58-17-6, 122 points), who had already clinched first place in the Atlantic Division and the No. 1 seed from the Eastern Conference for the Stanley Cup playoffs that begin next week.

Florida finishes its regular season on Friday at Montreal, and a single point would clinch the Presidents’ Trophy that goes to the NHL team with the highest point total.

Florida dumped the puck in the Ottawa zone and pinned the Senators until Bennett stole the puck from Drake Batherson. He skated along the goal line until passing to Reinhart, who whiffed on his first one-timer but shot the second past Gustavsson.

It was the fourth goal in the past three games for Reinhart and his 33rd on the season.

The Panthers expanded their lead with two goals in the first two minutes of the third period.

Verhaeghe scored 21 seconds later off the rush following a turnover in the neutral zone for a 3-0 lead.

Maxim Mamin and Eetu Luostarinen assisted on both of Verhaeghe’s goals.

Florida also played without defenseman Radko Gudas and center Anton Lundell, who sustained minor injuries in a 4-2 loss at the Boston Bruins on Tuesday.

Huberdeau and Barkov are the Panthers’ top two point-scorers.