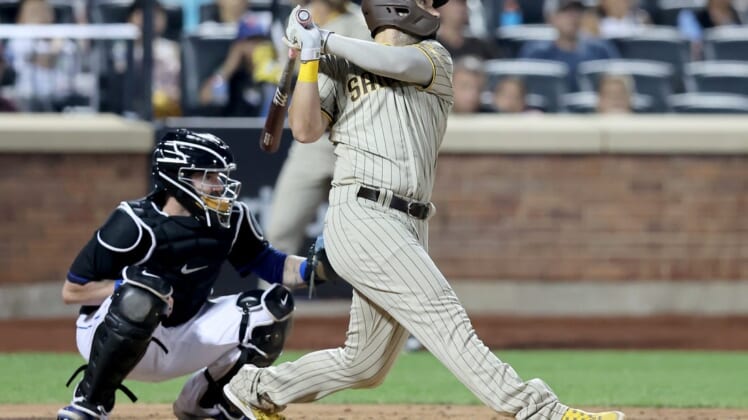 Yu Darvish took a shutout into the seventh inning while pitching seven stellar innings and bested Max Scherzer as the visiting San Diego Padres opened the second half with a 4-1 victory over the New York Mets on Friday night.

Darvish (9-4) improved to 5-0 in eight career starts against the Mets and won his third straight start against the NL East leaders.

Darvish allowed two of his four hits to Starling Marte and for most of Friday he was equally as dominant as last month’s start in San Diego when he took a no-hitter into the sixth and pitched seven innings of two-hit ball.

The right-hander struck out nine, walked one and threw 99 pitches. He also reached 1,700 career strikeouts when he fanned Francisco Lindor for the third time to end the sixth after allowing Marte’s second hit.

Darvish allowed a single to Marte two batters in and then retired 10 straight before Pete Alonso singled. He retired six straight until Marte’s second hit and got Lindor to chase a splitter slightly out of the strike zone.

After issuing a four-pitch walk to Jeff McNeil, Darvish allowed an RBI double to Luis Guillorme and quickly ended the seventh by retiring Travis Blankenhorn.

Eric Hosmer doubled and hit a two-run homer off Scherzer (6-2), who allowed two runs and five hits in six innings.

Scherzer also struck out eight and walked one in his fourth start since returning from an oblique injury July 5. It was his first home start since getting injured May 18 against the St. Louis Cardinals.

Trent Grisham added a solo homer and Jake Cronenworth scored on a throwing error by catcher Patrick Mazeika when the Padres scored twice in the seventh.

Nick Martinez followed Darvish with a 1-2-3 eighth. Taylor Rogers stranded two in the ninth and converted his 27th save in 32 chances.

San Diego took a 2-0 lead when Hosmer followed a single by Luke Voit by lifting a 2-1 95 mph fastball into the left field seats for his seventh homer and third career homer off Scherzer.

After Grisham homered off Joely Rodriguez to start the seventh, Cronenworth scored from second after Mazeika’s throw on a double play attempt eluded Alonso’s glove at first.

Mazeika entered as a pinch hitter in the sixth when Tomas Nido sustained a left hand contusion.