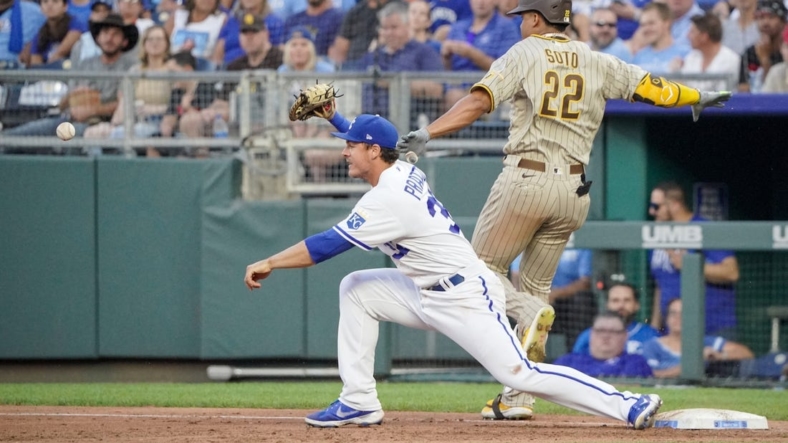 Yu Darvish survived a shaky first inning and then cruised as the San Diego Padres defeated the Royals 4-3 Saturday night for their second straight victory in Kansas City. The Padres will go for the sweep Sunday in their first series in Kansas City since 2002.

Darvish allowed three runs on five hits in seven innings. He walked two and struck out six. It was the Padres’ National League-leading 68th quality start this season.

Nick Martinez pitched the ninth for his sixth save in as many chances.

Daniel Lynch (4-9) took the loss. He allowed four runs on nine hits in five innings. He worked out of further trouble often, using six strikeouts to his advantage.

The Royals, who trailed 3-0 after a half inning and 6-0 after three innings Friday, loaded the bases with one out against Darvish in the first inning. Hunter Dozier lined a single to right, scoring Bobby Witt Jr. Nick Pratto then lined a double off the wall in center, scoring Salvador Perez and Ryan O’Hearn.

Darvish threw 34 pitches in the first, but he struck out Michael Massey and got Drew Waters to ground out to avoid further trouble.

For the second straight night, Wil Myers hit an opposite-field home run, this one with Josh Bell on base in the second inning, to cut the lead to 3-2.

Manny Machado lined a single to right to score Jose Azocar with the tying run in the third, followed by an RBI single by Brandon Drury, scoring Juan Soto, putting the Padres in front.

Darvish retired 13 batters in a row after allowing runners on first and third with one out in the second inning. He retired 17 of the last 18 batters he faced.