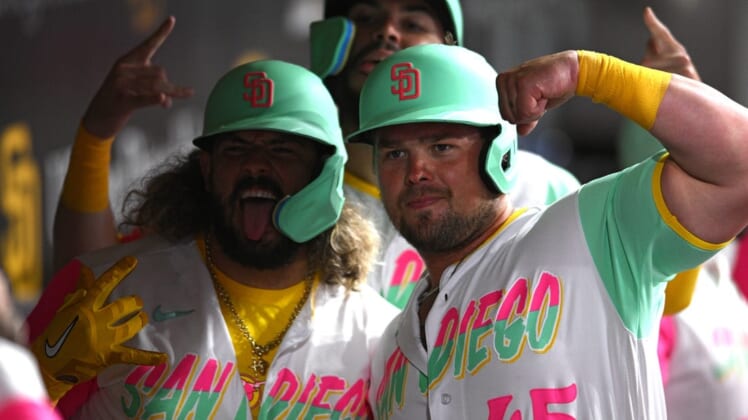 The host San Diego Padres hit five home runs, a season-high, all coming against Minnesota Twins starter Joe Ryan on Friday night in a 10-1 rout that opened a three-game series.

Luke Voit, Ha-Seong Kim, Eric Hosmer, Manny Machado and Jorge Alfaro homered as Ryan (7-4), a rookie, gave up all 10 Padres runs in 4 2/3 innings in the worst start of his career. His earned run average shot up from 2.89 to 3.78. Before Friday, Ryan had never given up more than two home runs in a game.

Padres starter Blake Snell (3-5) gave up one run — Byron Buxton’s 25th homer of the season — on four hits and a walk with seven strikeouts in six innings.

Voit started the barrage with a two-run homer in the first. Voit’s 13th of the season was a towering drive to left. He later added an RBI double in the Padres’ six-run fifth against Ryan.

Kim hit his sixth homer in the second to make it 3-0. Hosmer hit his eighth homer of the season in the fourth to make it 4-1 after Buxton’s bomb in the top of the inning.

In the fifth, Kim led off with a single. Ryan retired the next two Padres, but Machado lined his 17th homer to left center. Jake Cronenworth then singled and scored on Voit’s double. After Hosmer walked, Alfaro hit a three-run homer to right-center. His seventh homer of the season made it 10-1.

The Padres’ previous high for homers in a game this season was three, which they did three times — once in May, June and July. The only time it happened at home was May 11 against the Chicago Cubs.

They began the night with only five homers total in their first nine home games this month. The Padres also had a season-high seven extra-base hits.