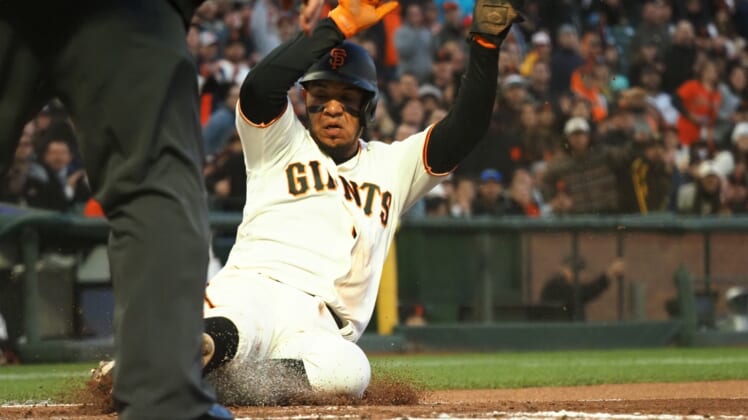 Manny Machado drove in the go-ahead run with a grounder back to the pitcher, Pierre Johnson stranded the bases loaded with a one-run lead in the eighth inning and the visiting San Diego Padres posted a 4-2 victory over the San Francisco Giants on Monday.

The Padres, who lost 11 of 19 to the National League West champion Giants last season, won their fourth straight by overcoming an early 1-0 deficit with single runs in the fourth, fifth, seventh and ninth innings.

Jurickson Profar’s infield single got the Padres even in the fourth before Austin Nola belted his first home run of the season on Giants starter Alex Wood’s last pitch for a 2-1 lead in the fifth.

Wood worked 4 1/3 innings, allowing two runs and five hits. He walked one and struck out six.

The Giants, who have alternated wins and losses in their first four games, scored their runs on a sacrifice fly by Mauricio Dubon in the second and a Steven Wilson wild pitch that scored Joc Pederson in the sixth, the latter drawing the Giants even.

The difference-making run off the bat of Machado came in the seventh. Ha-Seong Kim led off with an infield single, advanced to second on a bunt single by Trent Grisham and took third on a Nola flyout to right.

Giants reliever Tyler Rogers (0-1) then bobbled Machado’s potential double-play comebacker and could only get a single out at first while Kim raced home.

The Giants threatened off Johnson in the eighth when a Brandon Crawford single and a pair of two-out walks loaded the bases. Johnson struck out Dubon to kill the threat.

The Padres added an insurance run in the ninth on a two-out RBI single by Jake Cronenworth. New closer Taylor Rogers, brother of the Giants’ losing pitcher, worked around Brandon Belt’s third hit of the game, a one-out single, in a scoreless ninth for his third save.

Martinez, making his first major league appearance since 2017, limited the Giants to one run and five hits. He walked one and struck out six.

Cronenworth and Eric Hosmer had a pair of hits each for the Padres, who haven’t lost since dropping the season opener at Arizona on Thursday.

Crawford joined Belt in the multi-hit column with a pair of singles for the Giants.