Padres strike early, never look back to blow out Marlins 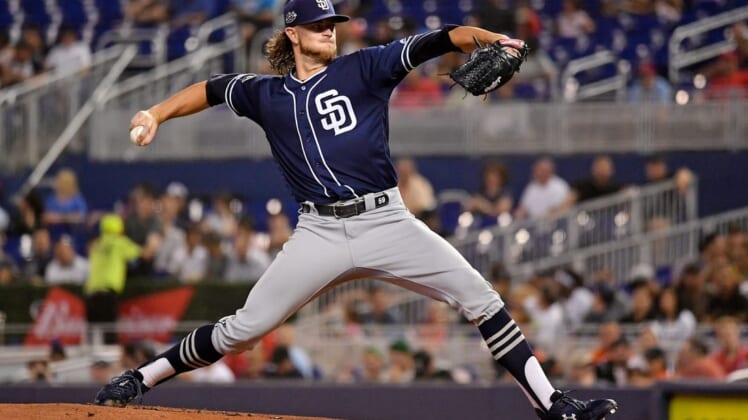 Padres shortstop Ha-Seong Kim went 3-for-4 with four RBIs, including a three-run double in the ninth.

San Diego first baseman Josh Bell, a key acquisition at the trade deadline, snapped a 0-for-26 drought with a ninth-inning double.

Padres starter Mike Clevinger left the game with a lead but did not get the win because he lasted just 4 1/3 innings. He allowed six hits, four walks and three runs.

Pablo Lopez (7-8) took the loss, allowing six hits, three walks and six runs in 4 2/3 innings. He struggled early, needing 36 pitches to get out of a five-run first inning.

San Diego loaded the bases with two outs in the first after singles by Juan Soto and Manny Machado and a Bell walk. Cronenworth then smashed a 1-1 changeup to right-center for a 4-0 lead.

The Padres added one more in the first as Trent Grisham walked, and Kim followed with an RBI double.

Miami cut its deficit to 5-1 in the bottom of the frame on consecutive doubles by Joey Wendle and Jon Berti.

The Marlins made it 5-2 in the fourth as Nick Fortes drew a seven-pitch walk, advanced to second on Lewin Diaz’s single and scored on Jacob Stallings’ base hit to center. Diaz, however, was thrown out at third base on the play, preventing what could have been a bigger inning.

The Padres extended their lead to 6-2 in the fifth when Soto drew a leadoff walk, advanced to third on a Machado double and scored on Brandon Drury’s groundout.

Miami pulled within 6-3 in the bottom of the fifth as Wendle doubled again before scoring on Brian Anderson’s double one out later.

The Padres stretched their lead to 7-3 in the eighth on a rally started by Kim’s walk. He advanced on Austin Nola’s walk, went to third on Jurickson Profar’s groundout and scored on reliever Huascar Brazoban’s wild pitch.

San Diego closed its scoring in the ninth on Kim’s bases-loaded double.