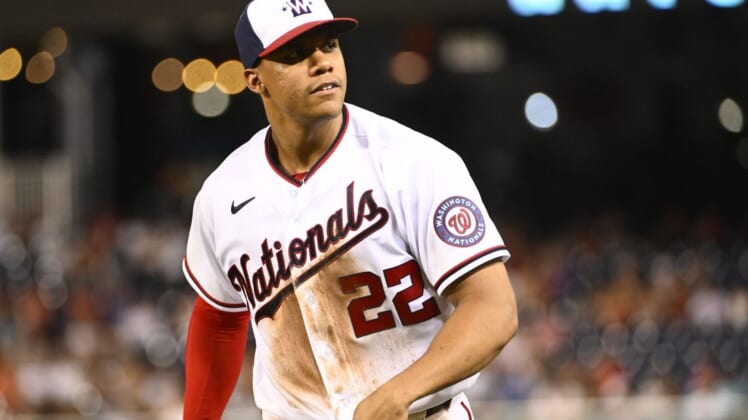 The San Diego Padres sprang into the highest stratum of World Series contenders by landing megastar Juan Soto in a deal with the Washington Nationals ahead of Tuesday’s trade deadline.

Per DraftKings Sportsbook, the Padres had +2000 odds to win the World Series on Monday, and a +950 to win the National League pennant. With the deal for Soto and slugging first baseman Josh Bell finalized, those odds shortened to +1100 for the World Series and +475 for the NL pennant as of Tuesday evening.

The Padres landed not only Soto and Bell but also Josh Hader, one of the best closers in baseball, and infielder Brandon Drury in separate trades.

San Diego still entered Tuesday’s action 12 games behind the Los Angeles Dodgers, who are favored to win the World Series at DraftKings (+370) following the trade deadline. But the Padres rose to sixth favorite, behind only Los Angeles, the New York Yankees (+390), the Houston Astros (+475), the New York Mets (+650) and the Atlanta Braves (+1000).

At FanDuel Sportsbook, the Padres even surpassed the defending champion Braves and ended Tuesday with the fifth-shortest World Series odds at +1000. It was a sizeable jump for a club that stood at +3000 following the All-Star break two weeks ago.

And at PointsBet, San Diego was available at +2000 to win the World Series as recently as Tuesday morning before reports of the Soto trade began leaking out. The Padres moved to +1200 at that book after the deal.

The Dodgers, Yankees and Astros comprise the top three favorites to lift the Commissioner’s Trophy at major sportsbooks. The Dodgers and Yankees are tied at +350 at PointsBet, with the Astros nearby at +400, and the Yankees have the slight edge on the Dodgers (+330 to +350) as the favorite at FanDuel, where Houston is at +430.

The Toronto Blue Jays didn’t see as dramatic of a jump as the Padres, but their deadline deals did move the needle as well. Toronto has the seventh-shortest World Series odds at DraftKings (+1200) and FanDuel (+1500) after the deadline.