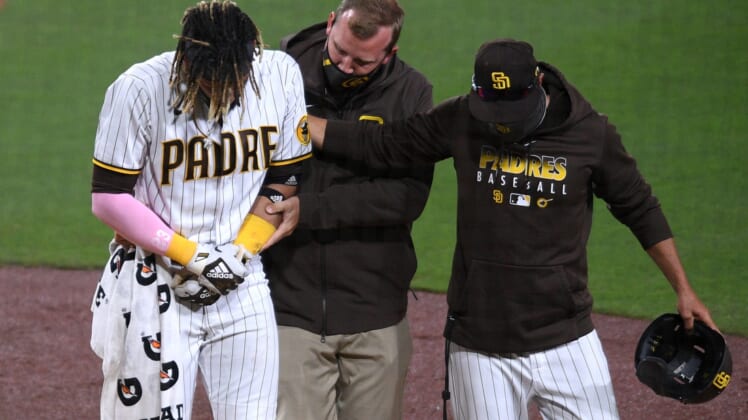 Apr 5, 2021; San Diego, California, USA; San Diego Padres shortstop Fernando Tatis Jr. (L) is helped off the field by a trainer and manager Jayce Tingler (R) after injuring himself during a swing during the third inning against the San Francisco Giants at Petco Park. Mandatory Credit: Orlando Ramirez-USA TODAY Sports

Tuesday might turn out to be the most important day of the San Diego Padres’ season, and it has nothing to do with the middle game of a home three-game series against the San Francisco Giants at Petco Park.

It’s the day that star shortstop Fernando Tatis Jr. is going to have his injured left shoulder evaluated by doctors.

The 22-year-old Tatis, who was signed to a 14-year, $340 million contract by the Padres in February, collapsed in pain at home plate after swinging through a strike-three pitch from Anthony DeSclafani in the third inning Monday night of the Padres’ 3-2 loss to the Giants.

Padres manager Jayce Tingler and a trainer rushed to the plate. Tatis walked off the field holding his left arm. He was immediately replaced in the game by Ha-Seong Kim at shortstop.

The injury was described as a subluxation of his left shoulder, which is not a new problem for Tatis.

“Right now he’s feeling better,” Tingler said of Tatis in his postgame media session. “Obviously, he was in a lot of pain when he came out of the game. I don’t have a lot more information. He’s been dealing with it. It comes out and goes back in. We’re going to get more tests tomorrow, I’m sure an MRI.”

A shoulder subluxation is a partial dislocation, with the humerus coming out of the socket.

The Padres have said Tatis had the injury while in the minor leagues. He re-injured the shoulder on a head-first slide into home in a game during spring training. Ten days later, Tatis left a game after again hurting the shoulder making a lunging stop in the field.

“It didn’t happen last year,” said Tingler of Tatis, who finished fourth in the National League Most Valuable Player voting in 2020. “I’ve just heard that it’s happened in the past. We ask him every day, ‘You feel anything?’

“This is the first time I’ve seen him wince during a swing. That’s the most pain I’ve seen him in. I think it was out (of the socket) when he was on the field and went back in place when he was back in the training room. It’s concerning. Again, we don’t want to jump the gun. We’re hoping for good news and see where it goes from there. Maybe it’s bothering him more than we realize.”

There has been concern that Tatis’ aggressive style of play could be a problem during his career. The head-first slide that seemed to trigger this spring’s injuries came when Tatis tagged up and scored from third on an infield fly to short left.

Tingler said Kim, an offseason signee from South Korea, probably will be at short during Tatis’ absence, although Jake Cronenworth and rookie Tucupita Marcano also can play there. Manny Machado moved from third to short the first time Tatis went on the injured list in 2019.

Meanwhile, right-hander Yu Darvish will make his second start with San Diego on Tuesday night against Giants right-hander Aaron Sanchez, who is making his first start.

Darvish gave up four runs on eight hits (including two home runs) and a walk with six strikeouts in 4 2/3 innings in his Padres debut on Opening Day. He didn’t figure in the decision in the 8-7 win over the Arizona Diamondbacks.

The Giants signed Sanchez, 28, as a free agent after he missed the 2020 season following shoulder surgery. He was 2-0 with a 4.82 ERA in four starts with Houston in 2019. The former first-round draft pick was 15-2 with a 3.00 ERA with Toronto in 2016 and finished seventh in the American League Cy Young Award voting.

“The Giants say my curve is like a stock market pitch,” Sanchez said. “That’s one of your better stocks, the more money you put into it the more, the more times you use it, the better off you’re going to be. It’s that good.”