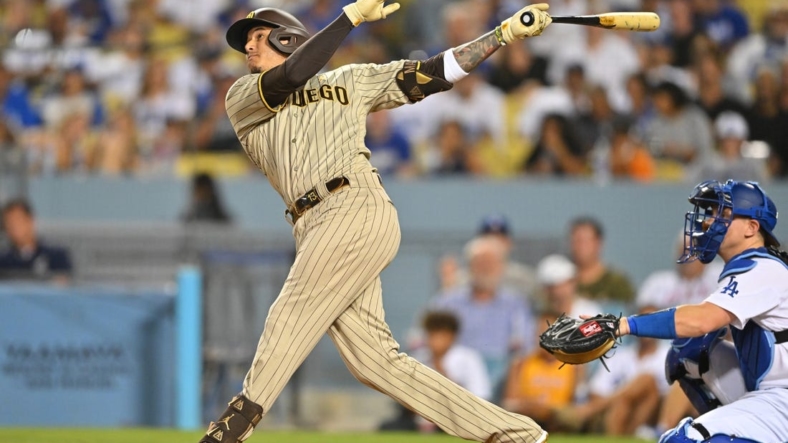 Manny Machado and Brandon Drury hit two-run homers in the third inning and Jurickson Profar added a three-run shot in the sixth as the visiting San Diego Padres opened a three-game series with a 7-1 win over the Los Angeles Dodgers on Friday.

San Diego starter Yu Darvish shut out Los Angeles for seven innings and reached the 3,000-strikeout milestone in his professional career that spans 17 seasons in Japan and the United States.

The Padres earned their fourth straight win and moved into second place in the National League wild-card race, a half-game ahead of the Philadelphia Phillies. The Dodgers took a third straight loss, one short of their worst skid of the season.

Machado and Drury each hit his 25th homer of the season on near-identical drives to left-center off Dustin May, who was making just his third start since returning from last year’s Tommy John elbow reconstruction surgery.

Machado’s home run followed a one-out walk drawn by Juan Soto. After May struck out Josh Bell, he hit Jake Cronenworth with a pitch. Drury followed with his fifth homer in 27 games as a Padre.

May opened the sixth by hitting Drury on the helmet ear flap with a breaking ball. After Trent Grisham drew a walk, May departed the game in favor of Heath Hembree, who opened by striking out Ha-Seong Kim and Austin Nola. However, Profar drove a low, 2-1 fastball into the right field seats to make it 7-0 with his 13th homer of the season.

May (1-2) was charged with six runs on four hits and five walks with five strikeouts in five-plus innings. He also hit two Padres. When Darvish hit Will Smith with a pitch in the bottom of the sixth, plate umpire Alfonso Marquez warned both teams.

The Dodgers broke up the shutout in the ninth against Nabil Crismatt.

With one out, Justin Turner one-hopped the wall in left center for his 31st double of the season and scored on Joey Gallo’s single down the line in right. Chris Taylor then drew a walk before Crismatt struck out Cody Bellinger and retired Hanser Alberto on a fly to center to end the game.