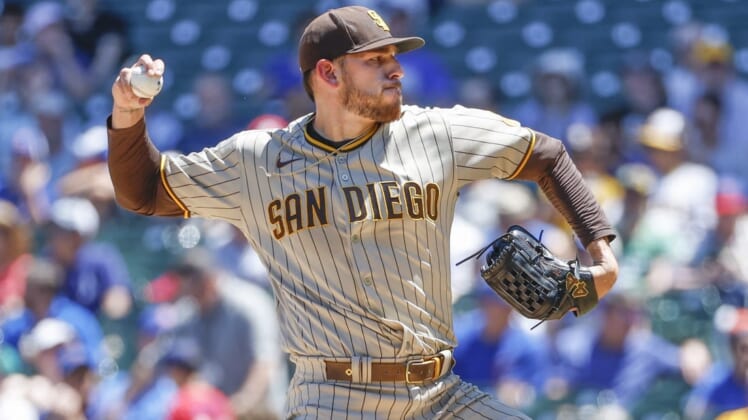 When the Padres visited Philadelphia for three games in the middle of May, San Diego was off to a fast start behind Manny Machado and some excellent starting pitching while the Phillies were struggling without Bryce Harper.

Now, as the Phillies come to San Diego for four games starting Thursday, Harper is back causing damage in the Philadelphia lineup while the Padres are at least temporarily without Machado.

The one thing that’s the same is that the Padres are still getting stellar starting pitching.

The Phillies are under new management. Rob Thomson took over as interim manager after Joe Girardi was fired on June 3.

The Padres are finally back under their manager after Bob Melvin returned from COVID-19 protocol on Wednesday. Melvin has missed 20 games this season — including the first Phillies series — due to two medical issues.

Right-hander Joe Musgrove (8-0, 1.59 ERA) will rejoin the Padres on Thursday, coming back from COVID-19 protocol to face the Phillies in the series opener. He will be matched against left-hander Ranger Suarez (5-4, 4.43).

Neither Musgrove nor Suarez appeared when the Padres took two of three in Philadelphia from May 17-19. The strange thing about that series was that all three games ended in shutouts, the Padres winning the bookends by 3-0 and 2-0 scores with the Phillies taking the middle game 3-0.

The Phillies are 8-5 when Suarez starts this year, and the 26-year-old Venezuelan has a 1.508 WHIP and a .270 opponents’ batting average. He has walked 29 and struck out 54 in 65 innings, and he is averaging exactly five innings per start.

“He’s very effective when he’s filling up the zone,” Thomson said. “He’s at his best when he’s not falling behind in the count.”

Musgrove is 2-0 with a 1.29 ERA in four career appearances, three starts, against the Phillies.

Suarez is 3-0 in his four quality starts, during which he issued only four walks in 26 innings. He is 1-0 with a 0.00 ERA in three games (no starts) against the Padres.

The Padres are 11-1 in Musgrove’s starts, and all 12 of those outings qualified as quality starts — a franchise record to open a season. In addition to having the second-lowest earned run average in the major leagues, Musgrove has a 0.924 WHIP and a .196 opponents’ batting average.

The question Thursday will be Musgrove’s stamina. He had COVID-19, and he last pitched on June 16, the day before his positive test. In that game, he gave up two runs on seven hits and a walk while striking out nine over seven innings during a road win over the Chicago Cubs.

“One thing I’ve noticed in Musgrove this year is his ability to adjust during games,” Melvin said. “He has five pitches. He quickly determines what is working and what might not be his best pitch on any given day. He goes to what’s working while checking in on the pitches he’s not using to see if they’re coming around. It’s a very professional approach.”

Melvin said of being apart from the Padres in the COVID protocol, “Watching the games was the toughest part. I had a lot of dialogue before games, we talked about lineups, configurations that day, all the things you would talk about with your staff if you were there. Once the game started, that was the hard part …

“I’d turn the TV on and off. Every day was like ‘Groundhog Day’ and trying to find a way to get through it. It wasn’t comfortable. I’m glad it’s over.”