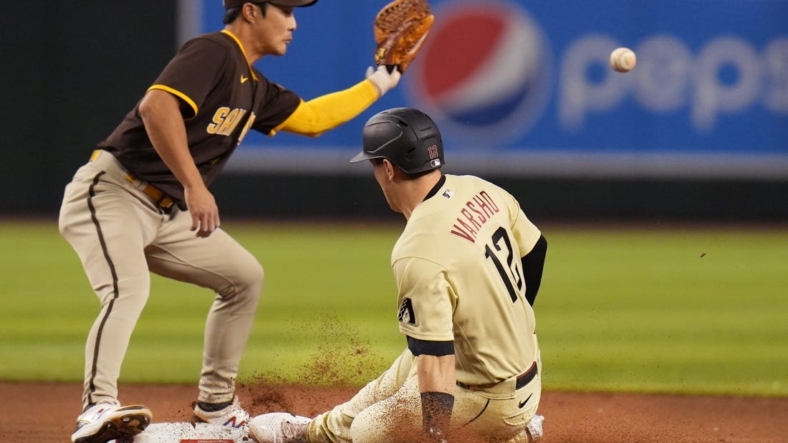 Gallen fell to 12-3 and had his eight-decision winning streak snapped for Arizona (68-77).

The win kept the Padres (80-66) 1 1/2 games ahead of the Milwaukee Brewers in the race for the third wild-card berth in the National League playoffs. Further, the Padres moved to within a game of the Phillies for the No. 2 position in the wild-card race.

Musgrove allowed four hits and no walks while striking out eight in his 95-pitch outing. Only one Diamondback reached third against Musgrove, who had streaks of retiring seven and six batters in succession.

In the ninth, Josh Hader gave up a one-out single but then was helped by a sliding catch by Juan Soto of a sinking liner by Christian Walker to right center. Hader retired pinch-hitter Ketel Marte on a fly to left to close out the five-hitter — the Padres’ 13th shutout of the season.

It was Hader’s fourth save as a Padre and 33rd of the season.

Gallen allowed two runs on four hits and three walks, with four strikeouts in 5 1/3 innings. The Padres drove up Gallen’s pitch count early as they loaded the bases in the first on a single and two walks without scoring. Gallen threw 29 pitches in the first and 20 in the second.

Jake Cronenworth opened the Padres’ fourth inning with a double, moved to third on Josh Bell’s groundout and scored on Ha-Seong Kim’s sacrifice fly to center to break up the scoreless tie.

Campusano, who had been ranked the Padres’ top prospect earlier this season, then homered to left on a 1-and-1 pitch, reaching the first row in left center. The homer was Campusano’s first since he homered in his Major League debut on Sept. 4, 2020.