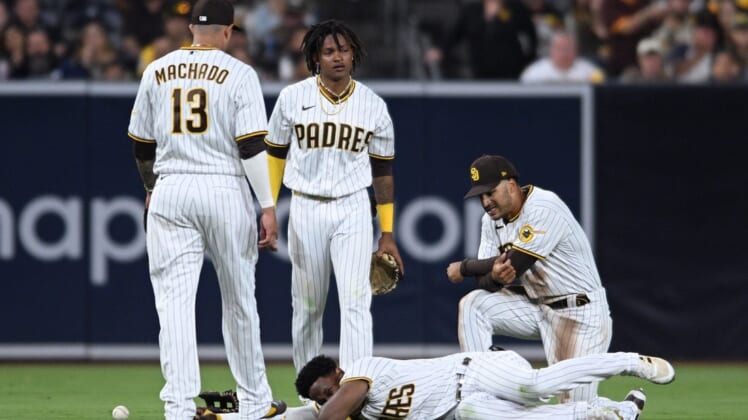 The San Diego Padres said Friday that outfielder Jurickson Profar was released from the hospital after being diagnosed with a concussion and neck strain overnight following a scary collapse on the field.

Profar is now resting at home. The Padres said in a tweet that further updates would be provided when available.

Profar collided with a teammate during Thursday’s game and later collapsed while trying to leave the field. He had to be carted off.

Shortstop C.J. Abrams ranged back into shallow left and made a stellar catch, but his left knee struck the jaw of Profar, who was sliding underneath.

Profar appeared dazed as he collapsed while trying to walk off. His neck and head area later were secured as medical personnel prepared to cart him away, and he was talking and moving his extremities.

Padres manager Bob Melvin later said that Profar never lost consciousness and did not have tingling in his arms.

Profar, 29, is in his third season with the Padres, previously playing five years with the Texas Rangers and one season with the Oakland Athletics. He is batting .242 with eight home runs and 38 RBIs through 83 games this year.