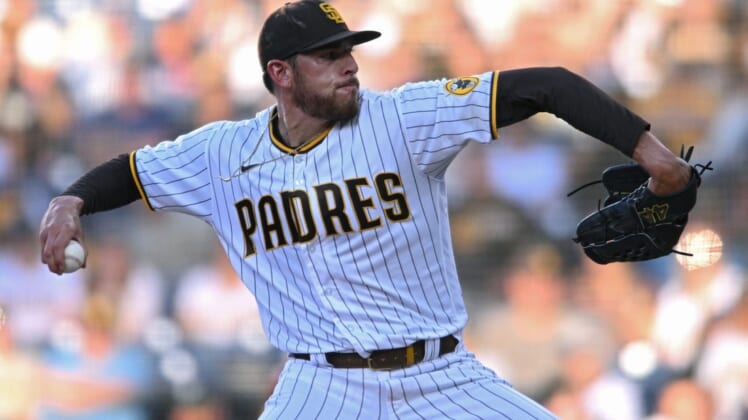 The result was overshadowed by an ugly fifth-inning collision that led to Padres left fielder Jurickson Profar collapsing on the field and eventually being carted off.

Ha-Seong Kim started the bottom of the 10th on second base as the designated runner. Giants reliever Jarlin Garcia (1-3) intentionally walked Austin Nola before Trent Grisham reached first on a bunt single to load the bases for Alfaro with no one outs.

Nabil Crismatt (5-1) struck out three in the top of the 10th around an intentional walk to get the win.

The Giants tied the game in the top of the ninth against Padres closer Taylor Rogers, who hit pinch hitter Austin Slater with a pitch to open the inning. Slater stole second before Rogers retired the next two hitters.

Brandon Crawford then singled to right past the dive of first baseman Jake Cronenworth to drive Slater in with the tying run on the Giants’ second hit of the game.

Manny Machado homered in the bottom of the fourth on an 0-2 changeup to break up a pitching duel between San Francisco’s Logan Webb and the Padres’ Joe Musgrove. It was Machado’s 13th homer of the season.

Musgrove held the Giants hitless through the first five innings. He finished with seven shutout innings, having allowed one hit, four walks and a hit batter with six strikeouts. Webb pitched eight innings, allowing one run on six hits and a walk with two strikeouts.

The game was marred by a Profar collision with rookie shortstop C.J. Abrams on a short fly to left by Tommy La Stella.

Profar was charging in and slid just as Abrams made a lunging, over-the-shoulder catch. Abrams’ right knee caught the left side of Profar’s face along the jaw line. Both players went down.

Profar collapsed twice while trying to walk off the field under his own power. Padres team doctors then instructed Profar to be placed on a body board and carted off the field, though the outfielder was talking with the doctors and moving his arms and legs. He waved to the capacity crowd as he left the field.

Abrams continued in the game.