Padres’ Mike Clevinger back in Cleveland for season debut 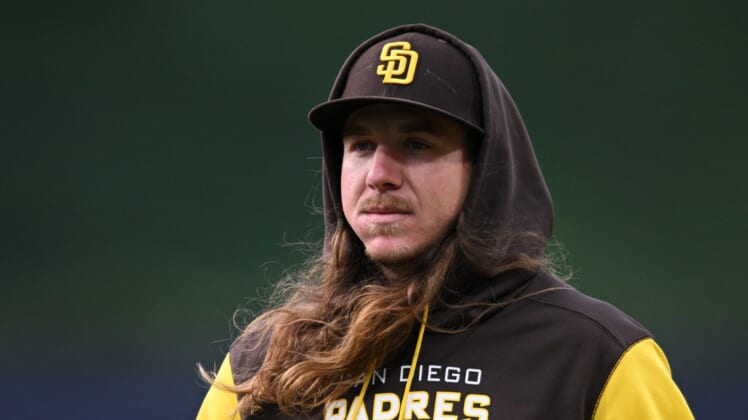 Emotions will likely be running high when the San Diego Padres visit the Cleveland Guardians on Tuesday.

Former Cleveland right-hander Mike Clevinger is expected to be activated from the injured list and make his first start for San Diego since Sept. 23, 2020. He was traded by Cleveland on Aug. 31, 2020, for six players, four of whom are in Cleveland’s starting lineup. He missed all of the 2021 season after having Tommy John surgery.

“I’ve had that one marked on my calendar since before the season,” Clevinger said.

He will oppose his best friend when he was with Cleveland, right-hander Zach Plesac (1-2, 3.80 ERA).

Clevinger, 31, helped pitch the Padres into the 2020 National League Division Series against the Los Angeles Dodgers before his elbow injury.

Clevinger made three rehab starts in recent weeks on two minor league levels, striking out 15 in 8 2/3 innings with a 2.08 ERA.

“I’m commanding all five pitches pretty well,” Clevinger said, according to MLB.com. “So, I feel like I’m ready to take that next step.”

Neither Clevinger nor Plesac has ever faced the other team.

The Padres, second in the NL West behind the Dodgers, come into the series with the top two batters in the majors — first baseman Eric Hosmer (.382) and third baseman Manny Machado (.375).

Hosmer recently hit three home runs in a five-game span for San Diego, which has won five of its last six games. Machado had four homers and 15 RBIs in April.

Padres leadoff hitter Trent Grisham recorded his first three-hit game of the season in a 5-2 win over the Pittsburgh Pirates on Sunday.

“It just feels good you get to contribute,” said Grisham, now batting .182.

Padres manager Bob Melvin is happy his hitters are starting to get hot.

“It’s important for us to get some contributions all over the board and Grisham is now swinging the bat better at the top,” he said. “You can’t rely on three, four, five guys all the time.”

The Guardians snapped a seven-game losing streak by sweeping the Oakland A’s in a three-game weekend series. Sunday’s 7-3 win gave Cleveland its first series sweep in Oakland since 2000.

The Guardians have been hitting the ball, something that pundits questioned coming into the season. They come into the San Diego series with five regulars batting over .300, including Miller (.377), Andres Gimenez (.346), Jose Ramirez (.341), Steven Kwan (.340) and Naylor (.313).

“The game is fluid,” Guardians manager Terry Francona said. “We’ve been very streaky. Hopefully, we’re in the midst of changing that.”