Padres looking up at Dodgers in NL West as rivalry renews 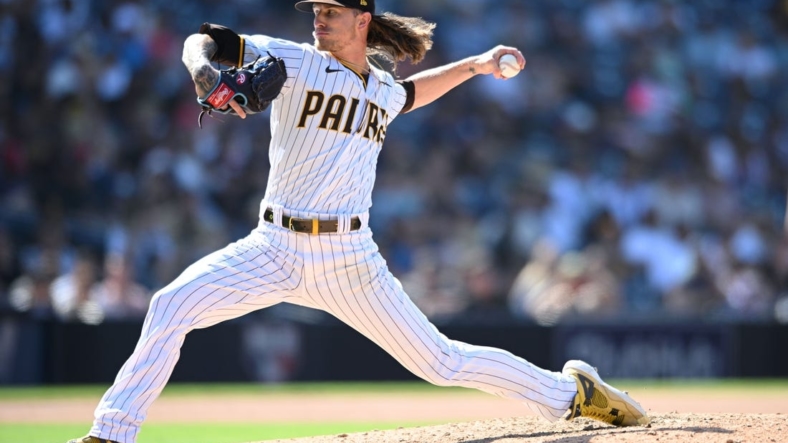 It was lined up to be a showdown out West, a dozen post-trade-deadline games between the Los Angeles Dodgers and San Diego Padres to decide a division title and take a local rivalry to new heights.

Instead, the National League West race is all but finished with a month left in the regular season. On Friday night at Dodger Stadium, the clubs will begin a three-game series with far less anticipation than expected.

The Padres have been better of late, entering the series on a three-game winning streak and taking five of their last six. But the Dodgers will enter with a commanding 18-game division lead on the second-place Padres.

All is not lost for San Diego, which still holds one of three NL wild-card spots.

When the Padres added Juan Soto, Josh Bell and Josh Hader at the trade deadline, they trailed the Dodgers by 11 1/2 games. But Hader has a 19.06 ERA in eight appearances with the Padres and Fernando Tatis Jr. is out for the remainder of the season on a drug suspension.

Hader did finally record his first save for the Padres with a scoreless inning Wednesday at San Francisco.

“It’s just bad timing, as soon as I come to a new team,” Hader said Thursday of his recent struggles. “But whether it was with Milwaukee or it was here, at the end of the day, it was something mechanically that I was going through. It was a little bump in the road that, ultimately, is making me into a better player.”

The Dodgers will send right-hander Dustin May to the mound for the third time since returned from Tommy John surgery. The Dodgers pushed May (1-1, 1.64 ERA) to six innings and 86 pitches in his most recent outing Saturday at Miami.

May is 1-3 with a 2.72 ERA in eight career appearances (five starts) against the Padres.

Six innings and/or 85 pitches might be the sweet spot for May as the Dodgers look to keep their promising starter fresh for the upcoming playoffs, with either a rotation spot or swing-man role awaiting in October.

Another piece of good news for the rotation came Thursday when Clayton Kershaw (back) returned from the injured list and delivered five strong innings against the New York Mets. But the Dodgers fell 5-3 at New York and went 4-3 on a trip that included a stop at Miami.

“We’re banged up more than we had hoped,” Dodgers manager Dave Roberts said.