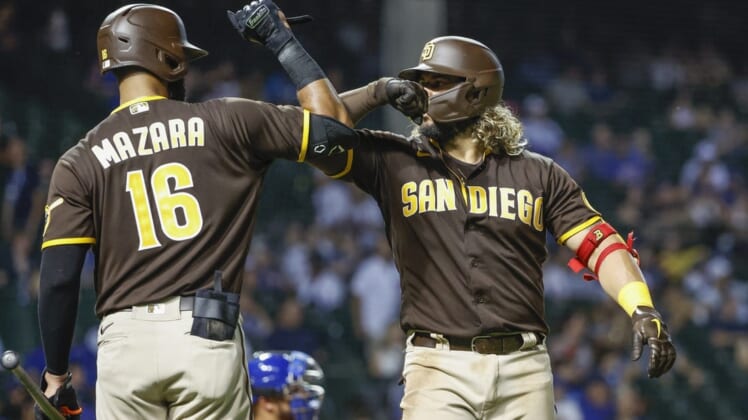 The San Diego Padres have taken advantage of the reeling Chicago Cubs to continue their best start in franchise history.

San Diego entered this four-game set with two straight losses. But after getting a brilliant eight-inning effort from Yu Darvish in Monday’s 4-1 win and overcoming a five-run deficit during Tuesday’s 12-5 victory, the Padres have won nine of 12.

At 39-24, the Padres have never started better. They’re also 22-11 on the road, having won a season-high five straight to seriously contend for the National League West lead.

“We’re just worried about us,” veteran Eric Hosmer told the Padres’ official website. “We stick to the stuff we’re good at. We believe we’ll be on top of those standings at the end of the year.”

Jake Cronenworth has been a big reason for San Diego’s recent success. He opened this set with back-to-back three-hit games and is batting .378 with 18 RBIs in his last 12 contests.

San Diego lost two of three at home to the Cubs last month, but now faces the North Siders at their lowest point of the season. A dismal 15-games under .500, Chicago has been outscored 65-21 during its season-high eight-game skid, and its relievers have posted a 7.88 ERA over the last 10 contests.

Looking to also snap a four-game home skid, the Cubs will give touted prospect Caleb Kilian (0-0 5.40 ERA) a second major league start in this contest. In his debut on June 4 against St. Louis, the right-hander allowed three runs, three hits and walked two, with six strikeouts in five innings of Chicago’s 7-4, 10-inning loss.

Kilian was sent back down to Triple-A Iowa, but with Drew Smyly, Marcus Stroman and Wade Miley all injured, the Cubs’ rotation is in a state of flux. It opens up another opportunity for Kilian, regarded as the club’s top pitching prospect, who is 2-0 with a 2.51 ERA in 10 minor league starts this season.

Meanwhile, the Padres are expected to call up Ryan Weathers from Triple-A El Paso to make his 2022 debut. The left-hander pitched in 30 games (18 starts) for San Diego last season, when he made his big-league debut, and went 4-7 with a 5.32 ERA.

Weathers, 3-4 with a 7.29 ERA in 12 minor league starts this season, allowed seven runs and 12 hits over 10 innings while going 1-1 in two starts against the Cubs in 2021. Willson Contreras and Patrick Wisdom have each homered off Weathers, and are a combined 3-for-9 against him.