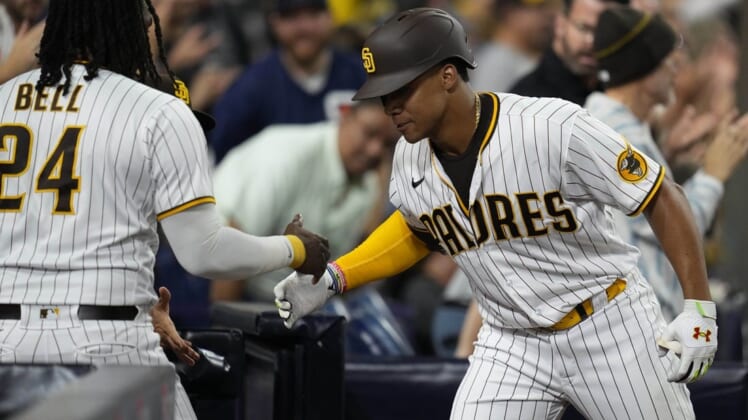 The San Diego Padres keep searching for ways to put together sustained success.

“We all believe in each other,” Padres first baseman/designated hitter Josh Bell said. “It starts with a night like (Saturday), a close game. We close it out and we come back (Sunday) and get another win and get this going in the right direction.”

Bell and Juan Soto homered against their former team as the Padres edged the Nationals 2-1 on Saturday. It was the first homer for Bell in 17 games with the Padres, who traded for him and Soto at the trade deadline earlier this month.

“It felt like a gorilla got taken off my shoulders,” Bell said. “I’ve just been trying to focus on routine in the (batting) cage.”

The owners of baseball’s worst record, the Nationals have been competitive against the Padres this year.

Neither Bell nor Soto had a hit in the first two games of the series, but the Nationals are well aware of what they can do.

“You know what kind of players they are,” Martinez said.

Padres manager Bob Melvin said he hopes the home run for Bell alleviates some pressure on the team newcomer.

“More aggressive swings,” Melvin said. “So hard work pays off. He and Soto both. To have both of them hit home runs and (account for) both our runs feels pretty good.”

Since the departure of Bell and Soto, others have had opportunities for the Nationals. Rookie Joey Meneses is 9-for-25 in six games against the Padres.

“It’s awesome,” Martinez said. “He’s working some really good at-bats. He has a great approach up there.”

The Nationals haven’t won a game in which Corbin has pitched since June 28, when he worked eight sterling innings against the Pittsburgh Pirates. Twice since then, Corbin failed to complete an inning. He has given up at least one home in 13 of his past 17 games.

Corbin is 7-9 with a 4.51 ERA all-time in 22 appearances, including 17 starts, against the Padres. That’s the third-highest win total against any opponent in his career. He split two decisions against San Diego last year, though in the victory he was aided by then-teammate Soto’s three-run homer.

Martinez said there are concerns regarding the bullpen’s workload, particularly with recently acquired left-hander Jake McGee.

“We’ve got to take it easy with him as well,” Martinez said.

The Padres will send lefty Sean Manaea (6-6, 4.83) to the mound Sunday as he tries to shed a rough August. He is 1-2 but has given up 15 runs (14 earned) in 13 innings in his three appearances this month. This came after he earned three victories in July.

Manaea has never faced the Nationals.