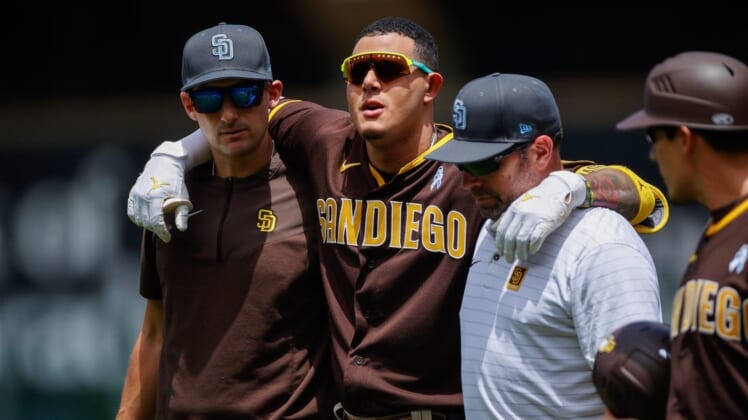 The question in San Diego is how long?

How long will the Padres be without Manny Machado, who just over a third of the way into the season looked like a strong National League Most Valuable Player candidate?

That’s the concern ahead of the Padres’ seven-game homestand, with the first of three games against the Arizona Diamondbacks on Monday.

Machado injured his left ankle in the first inning Sunday in Colorado as it bent sideways over the first base bag while he was running out a ground ball.

The additional questions are: 1. How much damage was done? 2. How do the Padres score runs without both Machado and Fernando Tatis Jr., who still hasn’t been cleared to swing a bat since having hand surgery in March?

There was some initial good news. Despite how bad it looked, X-rays showed no fracture. But more tests will be made after the swelling goes down.

“All in all, it’s as good as it could be,” said acting manager Ryan Flaherty. “He’s feeling good right now. We’ll have a better idea of (how long he’ll be out) tomorrow.”

That would be Monday, when manager Bob Melvin is expected to return from the COVID-19 protocol to reclaim leadership of the Padres.

The Padres are returning from a road trip that opened with a four-game sweep at Wrigley Field, where they outscored the Cubs 41-15. Then they got swept and outscored 23-11 at Colorado, where the Padres have now lost 10 straight games.

Monday begins the Padres’ second series this season against the Diamondbacks, who are coming off a 3-3 homestand.

Right-hander Zach Davies (2-3, 3.78 ERA) will start for the Diamondbacks against Padres right-hander Yu Darvish (6-3, 3.35 ERA). The Padres opened the season by winning three of four games in Arizona.

Davies has a 1.31 ERA in his last three starts and pitched seven scoreless innings on Tuesday against Cincinnati.

“Zach has been doing a great job attacking the zone and getting easy outs,” said Diamondbacks manager Torey Lovullo, who sees an uptick in his team’s play. “We’re doing a better job in a lot of different areas … small ball, base hits, some clutch hitting. We’re doing things to help us win games.”

Meanwhile, Darvish is 2-0 over his past two starts, giving up one run on seven hits and no walks, with 13 strikeouts in 15 innings.

He worked a season-best eight innings in his most recent start against the Cubs on June 13. He has thrown more than 100 pitches in four of his last five starts, during which he has allowed eight runs on 23 hits and four walks, with 29 strikeouts in 36 1/3 innings for a 1.98 ERA and 0.743 WHIP.

Machado isn’t the only injury problem the Padres have. Joe Musgrove (8-0, 1.59 ERA) is on the COVID-19 injured list. Starters Mike Clevinger and Adrian Morejon have just come off it. The Padres haven’t identified a Wednesday starter.