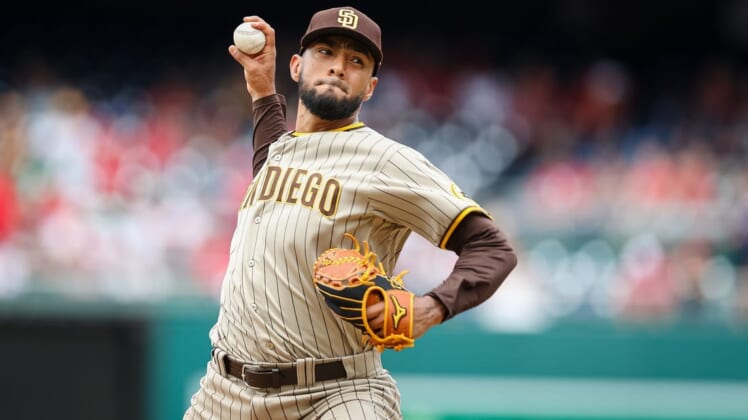 The San Diego Padres will return home after a disappointing 3-3 road split against two of the worst teams in the National League, only to get a rematch against the worst in the league — the Washington Nationals.

The Padres and visiting Nationals will begin a four-game set Thursday night.

The Padres’ once-solid hold on a National League wild-card berth now finds them holding on to the last spot by a mere two games.

After this six-game homestand, the Padres will embark on a nine-game trip to Kansas City, San Francisco and Los Angeles to play the Dodgers. And while 18 of their final 27 games are at home, the Padres have series against three division leaders — the Dodgers (nine games), Cleveland and St. Louis — remaining.

The Padres-Nationals series will start Thursday night with a right-handed rematch between Nationals right-hander Anibal Sanchez (0-5, 7.20 ERA) and the Padres’ Yu Darvish (10-6, 3.40). The pair faced off against each other on Saturday in Washington, D.C., with the Nationals winning 4-3 — their only win in the three-game series.

Sanchez, 38, has pitched just 30 innings in six starts for the Nationals this season after returning with a minor league contract. He has given up 25 runs (24 earned) on 34 hits and 14 walks with 22 strikeouts — for a 1.600 WHIP and a .286 opponents’ batting average.

But the only game the Nationals won this season when Sanchez started was against the Padres on Saturday when the pitcher held San Diego to three runs on six hits and three walks, with four strikeouts in five innings. He earned a no-decision in the Nationals’ win.

Meanwhile, the Padres are 12-10 in Darvish’s 22 starts this season.

The most recent loss was against the Nationals last Saturday when he gave up four runs on seven hits and a walk, with nine strikeouts in six innings. Darvish has gone at least six innings in 15 straight starts. He is 6-3 over his last 12 starts with a 2.93 ERA over 80 innings.

Darvish has faced the Nationals three times in his career. He is 1-1 with a 5.29 ERA.

Fernando Tatis Jr. will be in San Diego over the weekend to meet with Padres owner Peter Seidler for the first time since the shortstop drew an 80-game suspension for using a performance-enhancing drug. The ban will carry into the first two weeks of the 2023 season.

The meeting will come days before Tatis was expected to join the Padres for the first time this season after his recovery from a broken wrist. He also could meet with teammates to explain his actions.