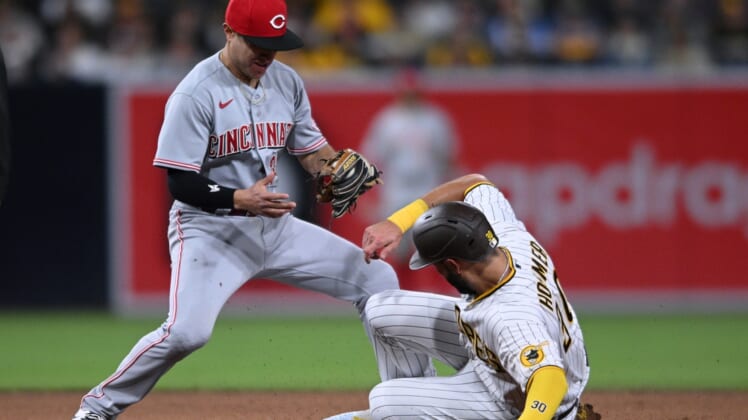 For the second straight night, Manny Machado answered a Tommy Pham solo homer in the top of the first with a two-run shot in the bottom of the inning and starting pitcher Joe Musgrove held Cincinnati to two runs and four hits over 6 1/3 innings as the Padres defeated the Reds 6-2 in San Diego.

The loss was the eighth straight for Cincinnati.

Just like he did Monday, Pham gave the Reds a quick 1-0 lead over his former team with his second homer of the season as well as the series.

And just as they did Monday night, Austin Nola led off the bottom of the first with a single and Machado followed with a two-run shot to left off left-handed Reds starter Reiver Sanmartin. The Padres added a third run in an inning that saw the Reds lose catcher and cleanup hitter Tyler Stephenson.

Luke Voit drew a one-out walk then tried to score on Jurickson Profar’s double into the left-field corner. But the relay beat Voit to the plate, leading to the collision. Stephenson departed after going through an on-the-field test for concussion symptoms. When play resumed, Eric Hosmer drove home Profar with a single.

The Padres added two more runs in the fourth off Sanmartin on a single by Hosmer followed by RBI doubles by Wil Myers and Jose Azocar. Their final run came in the bottom of the eighth, Jake Cronenworth scoring from third on a Hosmer groundout after being hit by a Ryan Hendrix pitch to open the inning.

The Reds’ second run came in the sixth. Aramis Garcia doubled with one out — ending a streak of 14 straight hitters retired by Musgrove — and scored on a two-out single by Kyle Farmer.

Musgrove (2-0) picked up the win. He retired after issuing his first walk of the season in the seventh. He had seven strikeouts. Sanmartin (0-2) gave up five runs on eight hits and a walk with four strikeouts in 5 1/3 innings.

When Stephenson had to leave the game in the bottom of the first after the home-plate collision with Voit, it created a strange situation for the already short-handed Reds. Cincinnati’s other catcher, Garcia, was already in the game as the designated hitter. When he took over the catching duties, Sanmartin was forced to go into the lineup hitting in the No. 4 spot and went 0-for-2 as the first actual pitcher to hit in the major leagues this season.